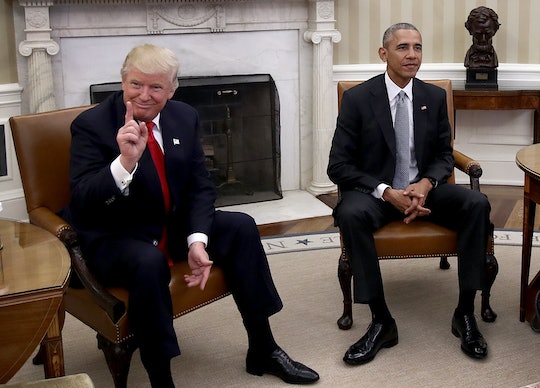 "Trumpcare" Vs Obamacare, Side By Side

On Monday, House Republicans finally revealed their version of a healthcare bill to replace the Affordable Care Act, known by many as "Obamacare." Dubbed "Trumpcare" in response to the previous administration, the House American Health Care Act, takes aim at key provisions of the Affordable Care Act while leaving some in tact. Then there are added provisions that reek of GOP agenda-pushing (more on that in a bit). When looking at Trumpcare vs. Obamacare, side by side, the differences are not just substantial, but immensely troubling for millions of Americans who would be negatively affected if the American Health Care Act became law.

One of the biggest and most glaring of differences between the two laws is the very name of the bill itself: Under Trump, healthcare will no longer be "affordable" — instead it's just going to be "American." And what's more American than paying exorbitantly higher healthcare costs compared to the rest of the world? But the GOP has offered a different perspective, stating that the House plan will "drive down" costs, House Speaker Paul Ryan said in a statement on the American Health Care Act on Monday, according to his website:

The American Health Care Act is a plan to drive down costs, encourage competition, and give every American access to quality, affordable health insurance. It protects young adults, patients with pre-existing conditions, and provides a stable transition so that no one has the rug pulled out from under them.

Let's take a look at the two laws side by side.

If you take a quick read into American Health Care Act, it would appear as though the provision on pre-existing conditions has remained untouched. But when you take a closer look, the AHCA requires "continuous coverage" for patients with pre-existing conditions, meaning that if a patient goes 63 days continuously without coverage, they must pay a 30 percent premium penalty.

Perhaps one of the most popular provisions of the Affordable Care Act other than the pre-existing conditions requirement was that parents could keep their dependent children up to age 26 on their healthcare plan. The AHCA has kept this provision entirely, and it would appear to be without any loopholes or caveats. Back when the ACA became law in 2010, this was especially helpful considering America's unemployment rate affected millennials substantially during the Great Recession.

These changes are definitely the biggest between Trump's plan and Obama's healthcare law. Flexible spending accounts (FSAs) and health savings accounts (HSAs) taxes would be repealed, which would benefit pretty much all Americans across the board — but ACA subsidies would also be cut. Those subsidies enabled thousands of low-income Americans to buy healthcare coverage at substantially reduced premiums they wouldn't have been able to otherwise buy.

Also gone are individual and employer mandates, which penalized individuals and employers for opting out of healthcare coverage. A CNN poll out on Tuesday found Americans are split on the issue of individual mandates. And much to the outcry of GOP governors, Medicaid expansion will effectively end in 2020.

Defunds Planned Parenthood In A Roundabout But Still Awful Way

What's particularly concerning is that Planned Parenthood is the only organization mentioned by name in the bill, making it more than obvious that this part of the mandate is solely driven by the anti-choice GOP agenda.

There's a lot to parse out in the proposed American Health Care Act — but I guess that's because "nobody" — even the president — knew that "healthcare could be so complicated."