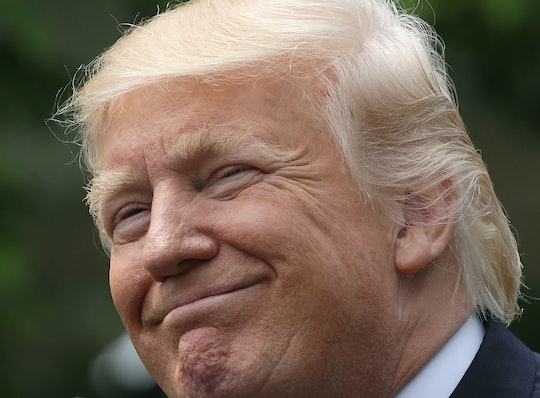 Five years ago, I was raped by a male coworker. The next day, I walked through the emergency room doors of a Portland, Oregon hospital, determined to report my sexual assault. As I gave my out-of-state ID to a nurse and whispered that I wanted a rape kit, I was scared and shaking, but I was resolute. In an egg-white exam room, I stripped naked in front of a forensic photographer five years ago, so he could take pictures of the bruises on my wrists, breasts, and thighs.

I had no idea what would happen, or if a rape kit would make a difference in terms of my attacker being brought to justice, but I knew one thing for sure: I wanted to report what had been done to me.

I don't feel that way anymore.

As I sat on my couch, watching the American Health Care Act (AHCA), also known as Trumpcare, pass the House after obtaining the necessary 216 votes (with one vote to spare), I wished I'd never walked through those hospital doors.

Under the AHCA, sexual assault is considered a preexisting condition, which means that health insurance companies can deny coverage to the estimated 1 in 6 women (and 1 in 33 men) who have been sexually assaulted. While the bill still has to pass the Senate, in a culture that already discourages sexual assault survivors from speaking out and sharing their stories — through victim blaming, low prosecution rates of those who perpetrate sexual crimes, and endless backlogs of rape kits — it's not unreasonable to assume that labeling sexual assault as a preexisting condition would even further discourage survivors from coming forward.

As a sexual assault survivor myself, I can't help but wonder: would I have spoken out about my rape, had I known how my future health care would be affected? I honestly don't know if I would have, and I am far from the only survivor who feels this way.

A standard rape kit, as described by Kim Hurst, director of the Sexual Assault Forensic Examiner program in Detroit, to TIME, is a "2-4 hour medical examine that includes pubic hair pulls or combs, and swabs of the outside of the genitalia, a speculum exam [which is internal]." The injuries sustained during a sexual assault, including any medication that is prescribed as a result of those injuries or in an attempt to combat any lasting effects of the assault, are recorded on the victim's medical record.

That medical record, contrary to popular belief and thanks to the Health Insurance Portability and Accountability Act (HIPAA) of 1996, is not private. As reported by CBS News, "telemarketers, debt collection agencies, the Social Security Administration, and your boss all have access to some or all of your medical information under certain circumstances." Health insurance companies, under the same law, are allowed to inspect your medical records "for the purposes of determining eligbility for health care coverage." In other words, under Trumpcare, if an insurance company sees an antibiotic or injury as a result of sexual assault on a patient's medical record, they can deny a sexual assault survivor coverage on the grounds that they are "high risk."

This would not be unprecedented. In 2009, before Obamacare, rape survivor Chris Turner was told that she would not receive insurance coverage because the HIV prevention medication she had been prescribed following her rape made her "too high a risk," according to CNN.

"If I knew seeking treatment at the time could have meant changes to my healthcare in the future, I probably would not have gone to the hospital."

Following my own sexual assault, I was prescribed Truvada, a medication designed to prevent HIV, which is standard protocol in order to protect sexual assault survivors from possible infection. That medication, along with the injuries I sustained during my sexual assault — bruises to my wrists, thighs, and breasts — were all written down as medical record.

Fortunately, at the time of my rape the Affordable Care Act was in effect, which guaranteed that tests for HIV, sexually transmitted diseases, interpersonal violence, and domestic violence screenings would be completely covered by insurance companies. But if the AHCA passes the Senate and is signed into law, that will no longer be the case, because insurance companies would have the right to deny me coverage.

Like me, Britni de la Cretaz, a freelance writer (who has contributed to Romper in the past), sought medical care in the form of STI testing and HIV prevention medication following her own sexual assault. "If I knew seeking treatment at the time could have meant changes to my healthcare in the future, I probably would not have gone to the hospital," she told Romper.

As the result of my decision to report my sexual assault, I endured countless hardships. My boyfriend at the time quickly blamed me for my assault. He told me I shouldn't have "been around a bunch of male coworkers," and he claimed that my failure to "know better" meant that I deserved to be raped. Years later, I also struggled with Post Traumatic Stress Disorder (PTSD), substance abuse, and bulimia.

However, none of the lasting trauma of my sexual assault affected my ability to obtain health insurance, because of Obamacare and the protection it provides to people like me. Now, my family's health insurance is in jeopardy, because I made the decision five years ago to report my rape and try to bring my attacker to justice.

One day in the near future, I might have to explain to my son that his mother may not be able to provide him with adequate health care coverage, because she was raped five years ago. And still, men are cheering.

As I listen to GOP members cheering in the House and singing songs, I can't help but look at my son, who is also covered under my insurance. I have to explain to him that his mother might not be able to provide him with adequate health care coverage, because she was raped five years ago. And still, men are cheering.