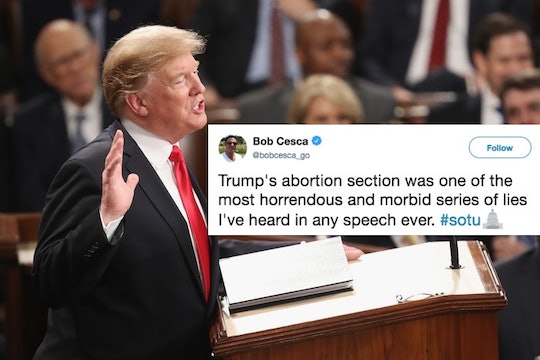 President Donald Trump had a lot to address when it came to polarizing issues during the 2019 State of the Union. Trump touched on border security, weapons of mass destruction, and abortion, to name a few and all of which are all relevant topics in the United States right now. But Trump's abortion comments at the 2019 SOTU, in particular, left many people enraged, and rightfully so.

During his two hour long speech, Trump harped on a matter of subjects that are super relevant to people living in the United States and those living in the world who are impacted by the actions of our nation. Whether people agree with him or not, being aware of Trump's stance on these issues is so important. But that doesn't mean that people have to agree with him for that matter. And Trump's comments on abortion were one of those things that people definitely should have had a problem with.

Lawmakers in New York cheered with delight upon the passage of legislation that would allow a baby to be ripped from the mother's womb moments from birth. These are living, feeling, beautiful babies who will never get the chance to share their love and dreams with the world. And then we had the case of the governor in Virginia, where he stated he would execute a baby after birth.

Trump continued, stating he would call on lawmakers to protect life, according to NPR, not a woman's right to choose what to do with her own body.

"To defend the dignity of every person, I am asking Congress to pass legislation to prohibit the late-term abortion of children, who can feel pain in a mother's womb," Trump said, according to NPR.

But people on Twitter definitely were not happy about Trump's stance on abortion and his call to action, taking to the website to share their thoughts.

While the president didn't flat out lie about these two states that he mentioned, he failed to address all of the facts. The proposed bill in Virginia will put an end to the 24-hour waiting period to get an abortion and remove a state-mandated ultrasound law, according to ReWire News. Meanwhile, the law in New York removes abortion from the criminal code and allows those who need late-term abortions to get the care they deserve in their home state, without having to travel.

Only a small percentage (about 1 percent) of abortions occur after 21 weeks of gestation, according to CNBC. The majority of abortions occur within 13 weeks, with two-thirds of abortions in the United States occurring within eight weeks. If late-term abortions are used in such rare cases, the president should have brought this up.

The facts are facts. And some people on Twitter felt like Trump wasn't being truthful with his comments on abortion.

Trump ended his points about abortion with two over-arching statements to sum up his thoughts on this topic, according to NPR.

"Let us work together to build a culture that cherishes innocent life," Trump said. "Let us reaffirm a fundamental truth: All children born and unborn are made in the holy image of God."

These words only reiterated the fact that Trump is pro-life, according to CNBC. And these words shouldn't go ignored — and this proves that people need to hold their lawmakers accountable for their actions — especially when it comes to them making decisions that have an impact on their bodies. If changing the law is a part of Trump's agenda for the year, citizens need to let their voices be heard — out of all of the things to make a priority, banning late-term abortion should not be one of the first priorities.