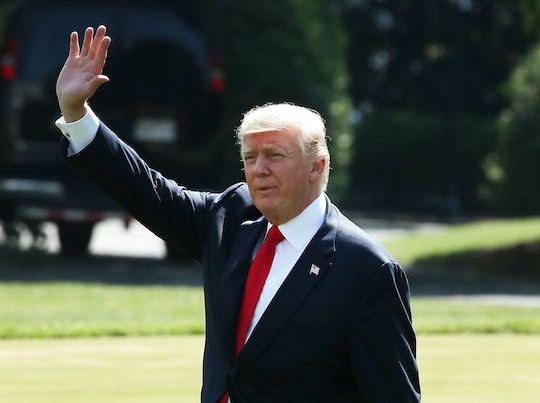 The President of the United States is looked upon in times of crisis for reassurance. They're looked upon to be a model for the nation and their words matter. So when President Donald Trump makes irreverent comments willy nilly about serious issues, whether it be on Twitter or during a speech, it can be unnerving. Case in point — Trump took the time to answer questions from reporters in New Jersey about the North Korea crisis, but his answer to a reporter about war with North Korea is absolutely terrifying.

Trump is known for alluding to things without giving a complete answer. He'll say enough nonsense that by the time the he finishes his reply, you forget the question he was asked. While that might have passed during the election season, it can't pass as president, where it is Trump's job to be clear with his words. But that wasn't what Trump did early Friday evening when faced with questions from reporters.

After addressing reporters about the North Korea crisis, Trump was asked one simple thing — "Are you talking about war? Is the United States going to war [with North Korea]?" "I think you know the answer to that," Trump told the reporter.

Judging by Trump's tweets from this past week, one could safely assume his real answer to that question is an answer of the yes or no variety (with an emphasis on yes). On Friday, Trump told reporters that North Korea leader Kim Jong Un would "truly regret it and he will regret it fast" if he attacks Guam or a U.S. ally, stating that Un would "not get away with what he is doing." These threats shouldn't be taken lightly when coming from the president.

Trump doesn't have the power to declare war; he has to have the approval from Congress first (although he is the only person who knows the nuclear codes, which is scary enough on its own). But there is not much Congress can do, according to CNN, if Trump is "determined to strike North Korea." Although he does need approval from Congress for war, according to The Washington Post, nuclear war is much different. Under the War Powers Act, Trump can launch weapons without the approval from representatives.

Because of this, Trump's answer to the reporter's question is particularly scary.