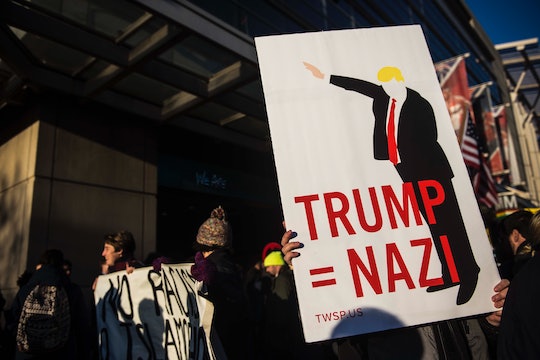 In the wake of the attacks on Brussels Tuesday morning, which claimed the lives of more than 30 people and injured more than 200 when bombs were detonated at the Zaventem airport and Maelbeek metro station, Donald Trump made the rounds on a number of morning news shows. Trump insisted that the U.S. should "close up our borders," and he also called for surveillance of Muslims, particularly at mosques (which I'd like to point out are actually houses of worship, and not terrorist meetinghouses). Not only will Trump's inflammatory anti-Muslim and anti-immigrant rhetoric do nothing to protect the U.S., it actually serves to empower ISIS, and it's insulting to the victims of the Brussels attacks.

According to Mother Jones, when speaking to MSNBC on Tuesday, terrorism expert Malcolm Nance said, "Good God, they're probably cutting videos of this right now. Donald Trump right now is validating the cartoonish view that they [terrorists] tell their operatives…that America is a racist nation, xenophobic, anti-Muslim, and that that's why you must carry out terrorist attacks against them…It's irresponsible and it needs to stop." To put it in terms that even Trump and his third-grade vocabulary can understand, if someone calls you a bully, you don't respond to that by giving them a wedgie and dunking their head in the toilet — that's just proving their point.

According to the Daily Mail, Trump told Fox and Friends that he would "close up our borders until we figure out what is going on." He later called in to another Fox News show, Mornings with Maria Bartiromo, where he doubled down: "We need surveillance. You need to deal with the mosques, whether you like it or not. We have to be smart, we have to be vigilant. I mean, these attacks aren't done by Swedish people." But, since we're on the subject, it's important to note that Paris attack suspect Salah Abdeslam, whose Friday arrest in Brussels is thought to be a catalyst for the Tuesday attacks, is a Belgian-born French citizen. He is thought to be one of the masterminds behind the November Paris attacks. So, no, not Swedish. French.

Rounding out the trifecta of evil was Trump's appearance on the Today show, where he made a case for torturing Abdeslam: "Waterboarding would be fine and if they could expand the laws, I would do a lot more than waterboarding," he told Matt Lauer, according to Bloomberg. "You have to get the information and you have to get it rapidly."

Trump later appeared on CBS News, where he backpedaled on closing the borders completely, claiming that he'd been misunderstood, and he only said that he'd be "careful" and "vigilant" at the borders. Although repeatedly pressed for details, he could offer no specific solutions. At no time did he appear to have any sympathy for Brussels, which he previously called a "hellhole" back in January.

A city is on lockdown, its residents are bloodied, broken, and frightened, and Trump has once again made it all about himself. Trump is currently leading the polls for the Republican presidential race. In addition to ignoring calls to remember and memorialize the people killed in Belgium, Trump has continued to use language that will empower the people behind the killings. It's tragic, and it has to stop.