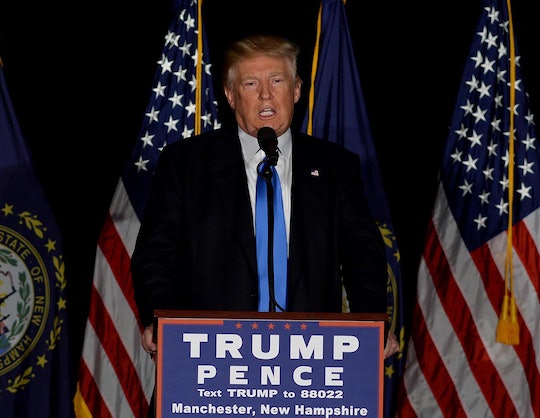 Since the inception of his campaign, Republican presidential nominee, Donald Trump, has faced criticism for his remarks about women, made both before and during his campaign. But now past remarks made by his new campaign manager, Kellyanne Conway, are just a drop in the bucket for the dangerously misogynistic ideals he has been long criticized for. Trump's campaign manager thinks rape wouldn't happen if women were stronger, according to Vanity Fair. It's a problematic sentiment with so many deep-rooted issues related to misogyny, victim-blaming, and rape culture. The Trump campaign hasn't responded to Romper's request for comment regarding Conway's statement.

In a 2013 roundtable hosted by PBS, and focused on the Pentagon lifting the ban on women in combat, Conway shared her reasons as to why the ban shouldn't have been lifted, according to Reuters:

Women are already making incredible contributions to the United States military and will continue to do so. But the military's first and primary mission is to win wars, and to be completely as capable, and as efficient, and a uber ready as it can be. We also don't want to put our women in harm's way.

As a way to drive home her point – and to challenge the notion that women in the military could undergo the same physical fitness tests as men to determine their military-readiness – Conway used rape to point out men's superior strength to women, according to Reuters:

Suggesting that women are raped by men simply because they are unable to fight them off is dangerous rhetoric for rape victims. It's victim-blaming rhetoric, that shows a clear misguided understanding for the nuances of rape, and what it means to be a rape victim. Not to mention rape survivors represent all sizes, strengths, and genders.

But this certainly isn't the first problematic rhetoric about women that has come out of Trump's campaign. Earlier this month, Trump's son, Eric Trump, said his sister Ivanka Trump is too "strong" and "powerful" to allow herself to be sexually assaulted. Last year, Trump's lawyer said a husband "can't rape" their spouse, in which he later called his comments "inarticulate." His remarks were in response to Ivana Trump's (Trump's ex-wife) 1989 "rape" allegation, unearthed by the Daily Beast, against Trump. Ivana took back the allegation in 1993, according to ABC News. Trump also denied those allegations at the time, Vanity Fair reported.

Throughout the years Trump himself has made troubling remarks about women, their appearances, and their sexuality, among other demeaning comments. Clearly, Conway's remarks only add to the growing list of reasons women have for not voting for Trump.