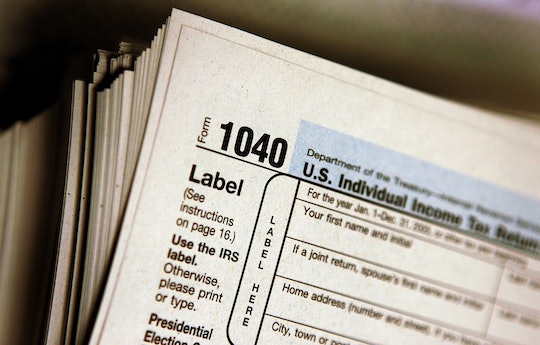 President Donald Trump’s latest budget proposal — expected to be unveiled as soon as Tuesday this week — will reportedly include several more massive cuts to safety net programs for families like food stamps, Medicaid, and the Child Tax Credit that parents can claim for each of their children. While the $1.7 trillion slash to the budget as a whole is concerning and could undoubtedly impact many people’s daily lives, Trump’s Child Tax Credit cut could also be why your 1040 may look a lot different when you file your taxes in the future.

Under current tax law, tax-paying parents and guardians can claim a tax credit of up to $1,000 for each child under the age of 17. According to the Tax Policy Center, families may receive some or all of the balance of this credit as a refund if it exceeds the amount of taxes owed that year, which also added that it was expected in 2016 that 70 percent of families with children received an average credit of $1,060.

So how will this change under Trump’s tax plan? Things are still in the works and are very complicated, but this tax credit could take a bit hit.

As Bloomberg reported, spending on the Child Tax Credit and the Earned Income Tax Credit — a refundable credit for someone, particularly those with children, who work and earn a low income — will be reduced by $40 billion over the next 10 years. According to a CNN report from February, the maximum amount a low-income family could receive is $1,200 under Trump’s proposal, but “most working class families would get far less than that.”

There is also the Child and Dependent Care Tax Credit (CDCTC) to consider, which is a separate tax code that lets parents claim a credit of up to 35 percent of the amount they paid for childcare during the tax year. Back in April, The Washington Post reported that the Trump Administration was considering making this credit refundable, allowing "working parents to slice a maximum of $2,100 from their tax bill for spending on child care." But, many fear that this would only benefit some parents, particularly those who pay expensive child care fees.

The tax system is incredibly complex and none of these proposals are set in stone right now. But what is clear is that there is certainly reason to be concerned now that $1.7 trillion in cuts to credits and programs that apply to families are on the chopping block.