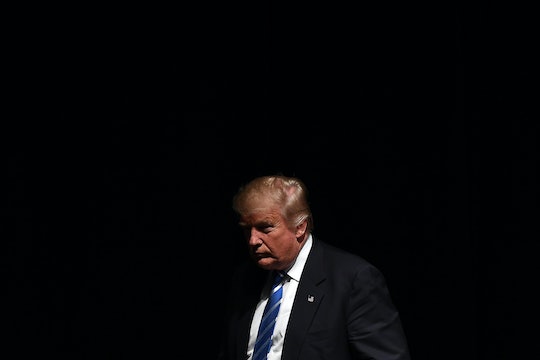 Trump's Claims The Election Is "Rigged" Against Him Are Un-American, Paranoid, & Dangerous

With only three weeks until the election, GOP presidential candidate Donald Trump is in that last, desperate dash to snag every undecided voter he can. That sprint to the election finish line has been beset with plenty of hurdles tumbling out of Trump's own mouth — almost too many almost to count at this point. But there's been a far more sinister narrative that has slowly emerged over the course of Trump's campaign: Trump claims the election is "rigged" against him — and it's a frighteningly unpatriotic and frankly dangerous assertion that he has made over and over again on the campaign trail.

At first, Trump's first claims that the "system" was rigged — when Vermont Sen. Bernie Sanders endorsed Hillary Clinton, the winning Democratic primary nominee back in July — bordered on intellectual clumsiness. Prior to that, Trump had dangled vague accusations of rigged "systems" as though Washington was rife with back room political boogeyman. On April 14, Trump tweeted about an upcoming interview for Fox News, where he promised to discuss the "rigged and boss controlled Republican primaries!" The next day, Trump tweeted about a "rigged delegate system." For the next two months, Trump bemoaned a "rigged" investigation into Clinton's personal email servers while Secretary of State.

But then in early August, Trump turned the rigging narrative around a much darker corner, claiming the election itself was rigged. Speaking at a campaign rally in Ohio, Trump said, "I’m afraid the election is going to be rigged, I have to be honest." Trump's claim, while completely without merit, isn't without some seriously shady campaign strategy at play. With his fondness for rambling off the cuff at campaign rallies, there's no way of knowing whether Trump came up with the "rigged election" strategy on his own, or if it was suggested by his campaign staff.

Regardless, alleging that the general presidential election will be rigged is a preemptive strike in the (most likely) event of Trump's loss to Clinton on Nov. 8. By claiming a loss due to a rigged system, Trump shifts the blame of his presidential loss away from his complete and utter lack of political experience, his alleged penchant for sexually predatory behavior, and his unchecked, rampant racism and Islamophobia. Nothing says chest-thumping American patriotism like implying presidential victory if it weren't for those darn election rigging scoundrels. (Trump has denied all of the assault and harassment allegations against him and has not been charged with any crime. Trump's representatives have not responded to Romper's request for comment.)

Darker still is that Trump's claim does fit into a rigged system narrative of its own that predates his presidential run, when the Supreme Court struck down parts of the Voting Rights Act in 2013. The GOP must have been pretty spooked by the ghost of voter fraud, leading to the passage of voter ID laws in 14 states since then — measures that put minorities at the greatest risk of voter disenfranchisement this November. This, despite the fact that there have only been 31 allegations of voter fraud in the United States — out of over 1 billion votes between 2000 and 2014 — according to a Loyola Law School study.

The election is not rigged for a Clinton victory next month. Far from it: Our election might be rigged in far more disconcerting ways, initiated by Trump's own party when they sought to legalize voter disenfranchisement — a plot that started long before Trump began spewing his delusions of presidential grandeur.

For 240 years since our nation's founding, America's legitimacy as a sovereign nation has been built on the foundation of free and fair elections followed by a peaceful transition of power to the next president. As U.S. citizens, this is a fundamental right that is not shared by many people outside of this country. People have died — and are dying — for that right elsewhere in the world. Here, it's at the core of American patriotism — and I'm not talking about apple pie eatin', baseball hat wearin', bald eagle tattoo sportin' patriotism. This is the kind of patriotism written into our country's very own Constitution: Our electoral process is the heart of what it means to be an American.

I'm sorry, Mr. Trump, but you can't simultaneously claim to "Make America Great Again" and then arbitrarily abandon one of the most democratic principles of our nation — free and fair elections followed by a peaceful transfer of power — just because there's a pretty good chance you're going to lose this election. To claim that the presidential election is rigged not only shows the enormity of Trump's ego, but how little America actually means to him at all.