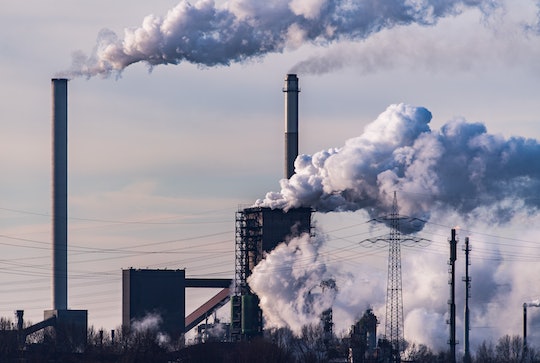 Signed on Tuesday, President Donald Trump's most recent executive order is another win for companies looking to deregulate. The primary industry he's addressing, though, is one that has grave and significant impacts, if left unchecked, and Trump's climate change executive order will hurt families, both now and in the future. Romper has reached out to the Trump administration for comment but has not yet heard back.

This newest executive order presents the opposite approach from the one taken by President Barack Obama in his Clean Power Plan. Rather than lead by example, encouraging other countries to lessen their environmental impacts by cutting emissions, Trump does away with these ideals completely. "My action today is latest in steps to grow American jobs," Trump stressed, claiming that the order "eliminates fed over reach" and "end[s] the theft of prosperity."

Trump's policies rely on coal in order to ultimately be "successful," though experts have noted that, coal isn't likely the key to the country's energy independence. "Even if we saw an increase in coal production, we could see a decrease in coal jobs," Robert W. Godby, an energy economist at the University of Wyoming, told The New York Times. Another energy economist, Robert N. Stavins, also noted that the United States doesn't import coal at present anyway, so producing coal within the country will not directly contribute to energy independence.

So what are the actual tenets of Trump's order? In short, the measure works to abolish carbon dioxide emissions limits for coal plants, "promote fossil fuel extraction" (thus allowing coal extraction on previously protected federal lands), and will do away with the preexisting "law that informed any federal decisions that have a significant environmental impact."

Considering the immediate effects of this order, families invested in the energy sector could suffer a loss in job security, as the United States prioritizes an industry (coal) that most experts agree is on its last legs over something more practical and long lasting (renewable). If the United States refuses to participate in the renewable energy sector, we'll continue to lag behind other countries who are investing in these necessary industries. Fortune notes that, despite their being a leading contributor of carbon emissions, China's leadership in the solar energy is something for the United States to emulate.

Aside from the fact that the United States is losing the opportunity to lay the groundwork for a soon-to-be-global energy phenomenon, a refusal to stick to agreed-upon environmental impact standards also sets a bad example. "The rest of the world will be asked to cover for the US falling behind," emphasizes environmental journalist Mark Lynas. If you're looking to teach your kids responsibility and accountability, our country's wavering commitment to reducing emissions isn't something to be proud of — and that's aside from all the damaging effects the roll-back will have on their futures and the world they stand to inherit.

Seeing as the United States contributes the highest carbon dioxide emissions per capita, a refusal to amend this behavior spells disaster in the future. Carbon dioxide is a primary contributor to global warming, which in turn causes rising sea levels and extreme weather. Such a volatile environment isn't the setting one would hope for, both for families of their own and for generations to come. In essentially ignoring the country's role in climate change, Trump is neglecting to look out for the true needs of American families, and is prioritizing business interests instead.