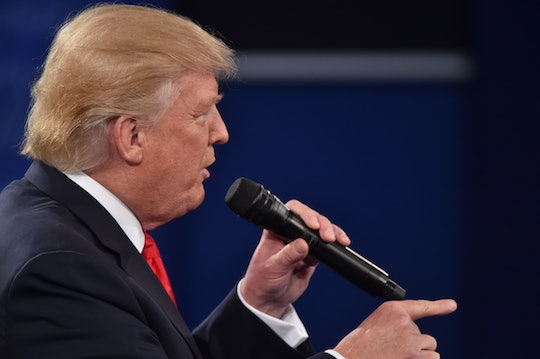 During the second presidential debate, a question from the audience regarding Muslim-Americans gave Donald Trump and Hillary Clinton a chance to address the ongoing issue of Islamophobia in the United States. When he answered, Trump once again invoked "political correctness" in his response — which was to respond to Islamophobia with more Islamophobia. Basically, Trump's comment about Islamophobia gets it all wrong.

When asked about how he'd help Muslim-Americans in the face of rampant Islamophobia, by a Muslim-American woman in the audience at the debate, Trump responded by saying:

Whether we like it or not, there is a problem. We have to be sure that Muslims come in and report when they see something going on, when they see hatred going on, they have to report it.

He then cited the December 2015 San Bernardino shooting as an example of what he sees as Muslim-Americans' responsibility to "report" incidents.

Many people saw the bombs all over the apartment of the two people who killed 14 and wounded many people. Muslims have to report the problems when they see them. If they don't do that, it's a very difficult situation for our country.

Essentially, Trump said that it's the responsibility of Muslims to report terrorism because they are, so far as he's concerned, the ones committing terrorists acts. Trump went on to directly call out Clinton and President Barack Obama for refusing to use the term "radical Islamic terrorist. He concluded by saying, "to solve a problem, you have to be able to state what the problem is, or at least say the name."

A major part of his campaign thus far has been the promise of strict immigration laws. But when asked about it during a Meet The Press interview June, Trump tried to back pedal his immigration stance. "I'm looking now at territory," he said. "People were so upset when I used the word Muslim. Oh, you can't use the word Muslim. Remember this. And I'm OK with that, because I'm talking territory instead of Muslim."

After the shooting in San Bernardino, his campaign gave a now oft-quoted (and meme'd) press release calling for a travel ban on all Muslins. Ever since it was released, the internet (particularly Twitter) has latched on to the statement, using the part about "figuring out what's going on" as a means to mock this year's high stakes election season:

As of Sunday night's debate, the release proposing the ban was still available on Trump's campaign website, implying that regardless of what we may have said during the debate, from the perspective of his proposed policies, the ban still stands. And his Islamophobic remarks at the debate seem to prove that he still very much believes it to be true.