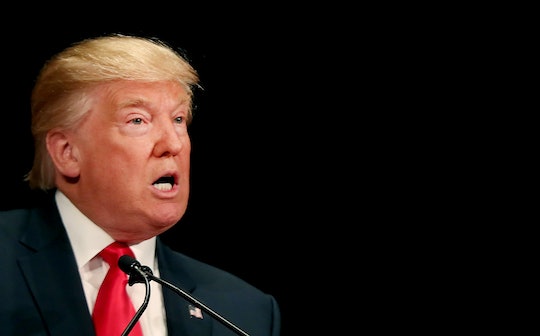 This week, while presenting to the Economic Club of New York, Republican presidential candidate Donald Trump proposed a few inventive new ways to cut back on taxes over the next 10 years. Chief among them? Trump suggested removing food safety regulations as part of his economic plan, calling the Food and Drug Administration's work "inspection overkill." While Trump's camp has since deleted this particularly thorny section from his economic proposition, the idea that a presidential candidate would throw food safety to the wind should concern pregnant women across the United States. After all, the FDA helps limit the outbreak of listeria and other harmful food-related illnesses that can — and do — affect pregnant women and their babies.

Trump's proposition to cut back on the FDA was revealed in a fact sheet on his website on Thursday (although it was quickly taken down and replaced with a new economic fact sheet that did not mention the FDA after media caught wind of it), according to The Hill. The fact sheet listed the "FDA Food Police" as a "regulation to be eliminated," explaining:

The FDA Food Police, which dictate how the federal government expects farmers to produce fruits and vegetables and even dictates the nutritional content of dog food. The rules govern the soil farmers use, farm and food production hygiene, food packaging, food temperatures and even what animals may roam which fields and when. It also greatly increased inspections of food 'facilities,' and levies new taxes to pay for this inspection overkill.

The FDA, of course, is the agency that helps protect American citizens (and those who import American products) from food-borne illnesses. In the past few months, it has investigated an outbreak of Hepatitis A (linked to frozen strawberries), an outbreak of E. coli (which kids under age 5 are especially susceptible to), and — especially crucial for pregnant women — multiple multi-state outbreaks of listeria (a bacteria that causes a condition that affects pregnant women and their fetuses, at times causing miscarriages, premature labor, and stillbirths).

In fact, there have been multiple cases of multi-state listeria outbreaks in 2016 alone, which killed five people and affected many more. The FDA, however — along with other federal organizations — run The Listeria Initiative, a nationwide surveillance system that monitors cases of listeria and detects trends, effectively catching outbreaks before they spread to larger amounts of people, pregnant women included. (What a waste of tax dollars, am I right?)

The FDA also recalls dangerous products and ensures companies comply with food safety regulations, and the organization recently finished implementing new procedures called for by the Food Safety Modernization Act, which is the largest food safety law reform in over 70 years. The FSMA was signed into law by Pres. Barack Obama in 2011, and it helps the FDA move from "responding to contamination to preventing it," as the FDA put it, by enforcing stricter regulations when it comes to food production and processing.

In other words, Trump would like to slash funding that goes to a federal organization that helps protect families from potentially life-threatening food-borne illnesses (and the time, effort, and cost that goes into treating them). Unsurprisingly, that policy might not be great for food safety in the United States, seeing as the number of food-borne illnesses usually declines when the government increases safety standards for companies. (Huge surprise!)

Trump may have deleted his policy on food safety pretty rapidly, but the fact that his team even considered cutting FDA funding should be worrisome to pregnant women across the States — and anyone else who likes their food to come uncontaminated.