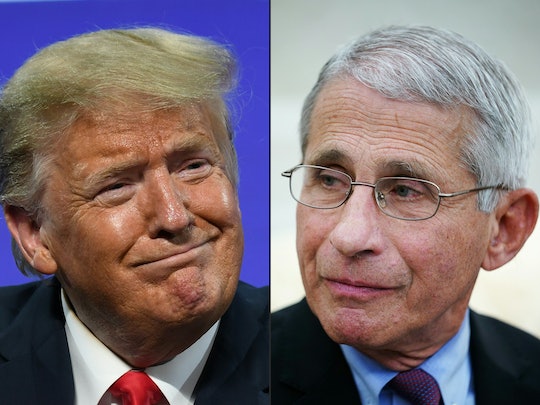 While speaking to supporters in Ohio on Monday, President Donald Trump appeared to suggest "nobody young" had been affected by COVID-19, despite the American Academy of Pediatrics (AAP) recently reporting 10.3% of all COVID-19 cases had occurred in children. But Trump's false COVID-19 claim about young people prompted National Institute of Allergy and Infectious Diseases Director Dr. Anthony Fauci to respond and push back on the president.

"Now we know it affects elderly people," President Trump told supporters while speaking at a campaign rally in Swanton, Ohio, on Monday. "Elderly people with heart problems and other problems. If they have other problems, that's what it really affects. That's it. You know, in some states thousands of people — nobody young — below the age of 18, like nobody — they have a strong immune system — who knows?"

Trump later encouraged his supporters to "take your hat off to the young because they have a hell of an immune system."

"It affects virtually nobody," the president continued. "It's an amazing thing."

On Tuesday, the number of deaths from COVID-19 surpassed 200,000 in the United States, according to data from Johns Hopkins University. Additionally, more than 6.8 million people are confirmed to have contracted COVID-19 in the United States since testing for the virus began.

While the numbers themselves don't lie, Fauci was quick to point out that Trump's false claim was not only wrong but disrespectful in an interview Tuesday with CNN's Sanjay Gupta. "You know, it's very disrespectful to me because I'm in my 70s," Fauci said in reference to Trump's apparent suggestion that COVID-19 was nothing to be concerned about because it only affected the elderly. "But it isn't just the elderly and those with underlying conditions because it can be serious in young people."

Earlier this month, a report analyzing state-level COVID-19 data from the AAP and Children's Hospital Association noted that more than half a million children had tested positive for COVID-19 since the pandemic first began. And as of Sept. 19, children represented 10.3% of all COVID-19 cases in the United States, according to AAP.

"Quantitatively, for sure, it's much much much less serious as a group in young individuals, but the thing we need to remember is that there are a number of people in our society of substantial proportion who have underlying conditions," Fauci said Tuesday. "And if you look at the two groups that are at risk for serious conditions, it’s the elderly and people at any age with underlying conditions. Underlining any age."

"There are plenty young people who have underlying conditions that put them at risk," Fauci continued.