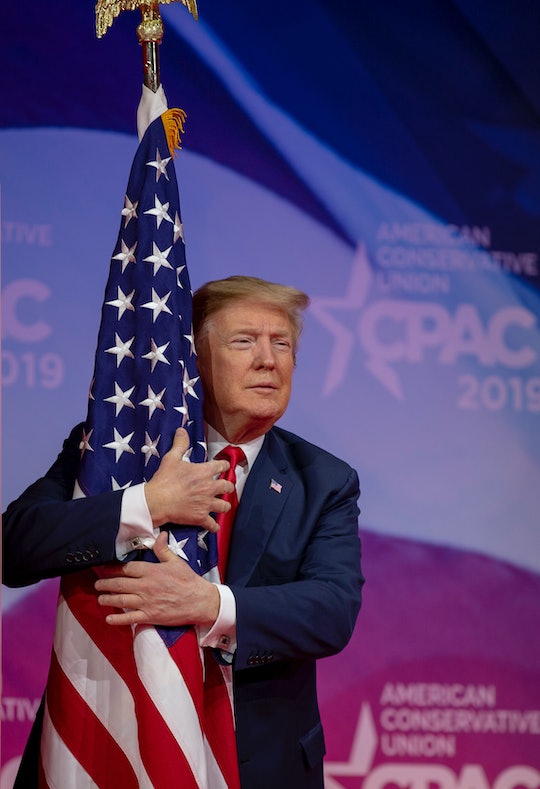 As people across the nation don their patriotic garb, fire up the grill, and enjoy fireworks displays with friends and family, a different kind of Independence Day celebration is slated in Washington, D.C. What has traditionally been a nonpartisan event at the Capital Mall — with zero participation by the POTUS — has been transformed into what many consider a campaign rally for President Donald Trump. Oh, and did I mention Trump's 4th of July event will reportedly take away $2.5 million from national parks?

Yep, you read that correctly. As CBS News reported, the event — which has been dubbed the "Salute to America" — will include tanks and infantry vehicles on display near the Lincoln Memorial, and Trump will be the first president to speak at the July 4th event since 1951. Flyovers by fighter jets, Air Force One, Marine One, a B-2 bomber, and the Blue Angels are scheduled, too. Oy.

Although the event is free to the public, the White House is reportedly giving VIP tickets to Republican Party donors, according to The Hill — which has definitely raised some eyebrows. And when Trump's campaign press secretary, Kayleigh McEnany was asked if she could ensure his campaign won't use the July 4 event in fundraising emails or in images used for the campaign, she told CBS News: "I can assure you we will act within the legal limits of what we're allowed to do." Hmm.

In light of all of this information, another tidbit of news has recently come to light: $2.5 million has reportedly been redirected from the National Park Service in order to pay for the Salute to America. According to the Washington Post, these funds would "typically be used to enhance the visitor experience either on the (National) Mall or at smaller parks across the country with projects ranging from road and bridge repair to habitat restoration." It's worth noting that National Park Service deputy director Denis P. Galvin told the Washington Post that the National Mall 4th of July event typically costs roughly $2 in total.

In an email, Mike Litterst, chief of communications for National Mall and Memorial Parks, told Romper:

The Department of the Interior is committed to providing the American people a fantastic celebration of our nation’s birthday. We are doing so consistent with the Department’s mission and historical practices. We hope everyone enjoys the Fourth.

It's worth noting the Trump administration has pushed for cuts to the National Parks Service budget in the past. So the reported $2.5 million diverted from the department doesn't come as a huge shock, I suppose.

As CNN reported, Trump tweeted on Wednesday that "the cost of our great Salute to America tomorrow will be very little compared to what it is worth. We own the planes, we have the pilots, the airport is right next door (Andrews), all we need is the fuel. We own the tanks and all. Fireworks are donated by two of the greats. Nice!" Romper has reached out to the Trump administration for comment, but did not immediately hear back.

But yeah. Twitter definitely has some feelings about the whole thing. One person tweeted, "I've never hoped more for rain in Washington, DC more than I do for #IndependenceDay. It would be like a shout out from God. Fingers crossed."

Another Twitter user pointed out, "And the rest comes from the DOD budget? Crew time, fuel, maintenance...to say nothing of making the military work instead of being with their families on the 4th of July."

Yet another person tweeted, "The Lincoln Memorial and an armored military vehicle. This image captures so much of what is wrong with Trump and the mindset he is promoting."

Twitter users aren't the only ones upset by how the July 4 event will reportedly be funded. "It's irresponsible to ask the National Park Service to absorb the costs of an additional and political event when there are so many unmet needs in the parks," Phil Francis, chair of the Coalition to Protect America's National Parks, told The Washington Post. "The men and women of the National Park Service have been asked to do more with less for too long.

Funds should be directed to the agency's highest needs such as operation of the parks and the maintenance backlog and should not be directed to support political objectives.

Personally, I would have to agree. Because to me, Trump's "Salute to America" seems like a slap in the face to the National Parks Service and to the taxpayers who will ultimately foot the bill.