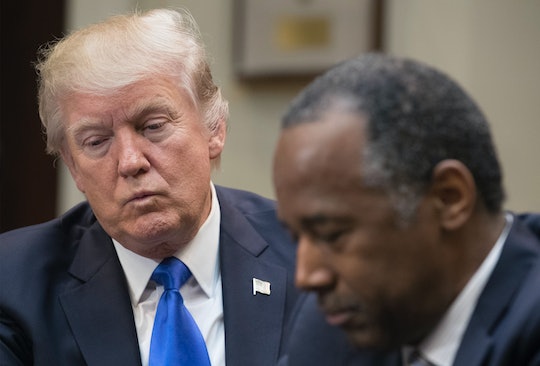 What Does Trump Know About Frederick Douglass?

In a bit of surprising news, President Donald Trump may or may not know who Frederick Douglas was. (That may be a comedic exaggeration... but just hear me out.) To mark the start of Black History Month on Wednesday, Feb. 1, our 45th president made a statement regarding the noted former slave turned abolitionist, according to The Atlantic, saying, "Frederick Douglass is an example of somebody who’s done an amazing job and is getting recognized more and more, I notice." As he tends to do in most of his statements, Trump then rambled on about himself some more, but still, it was his vague, somewhat confusing statement about Douglass, who died in 1895, that has stuck out. All told, Donald Trump's Frederick Douglass comment left many people scratching their heads, for good reason.

We're all pretty used to the strange remarks made by our newest commander in chief by now, right? I mean, on his first full day in office, Mr. Trump literally said, "Trust me, I'm like a smart persona," while speaking at CIA headquarters. So, the fact that these latest comments are standing out like they do should really say something.

And so, his remarks at today's listening session about Black History Month are especially important, as it seems that Trump may or may not understand Douglass' historical significance, at the very least. (Romper has reached out to the White House for comment on Trump's Douglass comments and is awaiting a response.)

Trump's referral to Douglass as being "recognized more and more" is a bit troubling in more ways than one. First of all, the implication that Douglass hasn't always been well-known is insulting to his legacy. On top of that, Trump used the present tense "is," which has prompted some to claim that he's under the impression Douglass is alive and well right now, just hanging out at the National Mall, "where people can learn about Reverend King, so many other things." (That's probably not the case, but Twitter is nothing if not aggressively and overly-analytical.)

While erratic Trump statements aren't really anything new, the president's alleged lack of knowledge regarding Black History Month, which some felt was on display Wednesday, is troubling in and of itself. While delivering his remarks this morning, Trump spent about two minutes discussing Reverend Martin Luther King, Jr., Rosa Parks, Harriet Tubman, Frederick Douglass, and Ben Carson. Then, he decided it was as good a time as any to talk about "fake news" and how bad CNN is — leaving many to wonder whether any other black historical figures had crossed his mind prior to the sit-down.

Black History Month is just beginning, but it's not exactly off to a good start with Trump's latest remarks. Here's hoping future black history statements out of the White House will get better in the coming weeks.