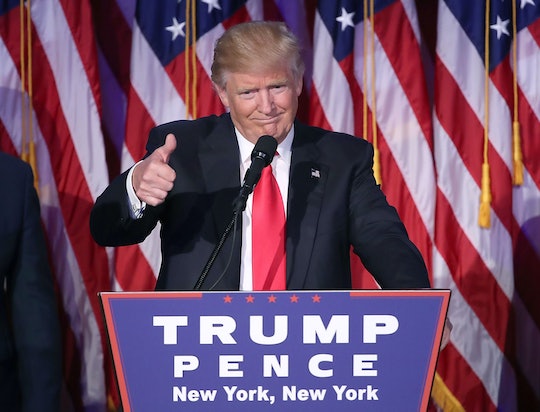 Over the holiday weekend, Green Party candidate Jill Stein filed a request for a recount of votes in the major swing state of Wisconsin. On Saturday, Hillary Clinton's campaign said that her camp would also participate in the recount — which could mean one of many things, including, perhaps, that she and her advisers are either carefully optimistic about the results. One person, however, is not so pleased: President-elect Donald Trump's Hillary Clinton recount tweets show he's far more worried about the recount than he's letting on.

Of course, Trump refused to stay silent. On Sunday, the president-elect took to Twitter (as he usually does when upset) to respond to the possible recount that might happen in Wisconsin — and, as one would expect, he wasn't happy about it.

Trump is fair in pointing out Clinton's contradictions — for someone who was so adamant about Trump conceding, her participation in the recount might feel a little unfair. But Clinton won the popular vote by 2 million votes, which was the widest gap in raw vote history, according to NPR. And according to Elias' essay, officials in the Clinton campaign "received hundreds of messages, emails, and calls" urging them to investigate the claims that the election was hacked, prompting them to respond in kind by offering up a half-hearted "yes" to a recount push.

Whereas during the campaign cycle, Trump played coy about possibly conceding in the election, Clinton has already conceded to Trump — participating in the recount means that they're just making sure that, according to Elias' essay, "the process proceeds in a manner that is fair to all sides" and that the voices of those citizens who felt slighted are heart. Neither Clinton nor her team have hinted that they expect the results to change once the recount occurs.

Trump's tweets target Clinton specifically — but in reality, they shouldn't be, especially when she had little involvement in raising the money or filing for the recount that Trump has so openly lambasted. Those are asking for a recount are Clinton's supporters and a collective of analysts who believe that something is amiss, and Stein who is filing for the recount to "ensure the integrity of our elections." Together, they raised over $6 million in just five days to be put towards the recount. Trump's misguided tweets then seem to target all the wrong people.

But Trump shouldn't have reason to be scared (unless he knows something the rest of us don't): According to The Washington Post, "if the election were hacked, a recount couldn't prove it," and according to The Guardian, "the recount process is ... unlikely to change the election unless widespread voter fraud is proven." So why is he getting so heated?

Trump calls this fundraising act "sad" but in fact, it's pretty amazing. According to The Washington Post, Stein raised more money in 24 hours on Wednesday from donors than she did her entire campaigning process. Trump's tweets from Sunday morning show that Trump may be far more worried about the results of this recount than he is letting on. If this fundraising and recount effort proves anything, it's that you shouldn't dismiss the millions of people who voted for Clinton (and Jill Stein) just yet.