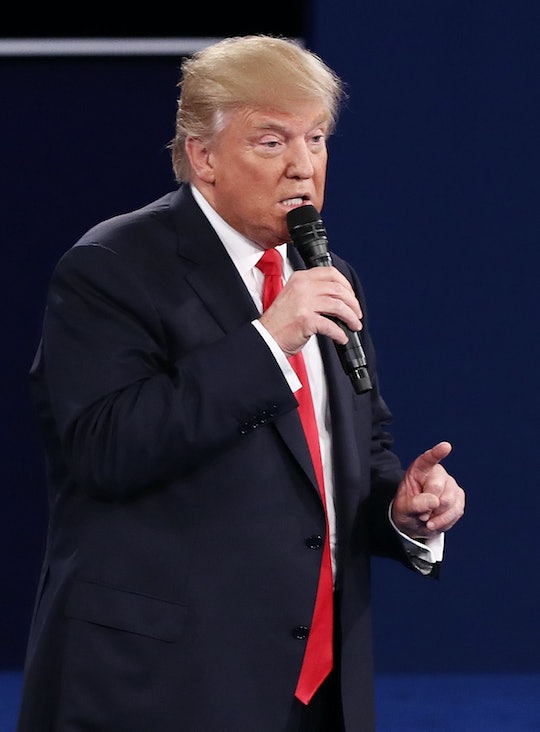 At the second presidential debate, the conversation very quickly turned to the leaked tape of Donald Trump bragging about his alleged sexual assault of women. Trump defended his comments by saying they were "just words." But Donald Trump's "just words" quote shows how much he doesn't understand about words. Words have immense power.

On the tape in question, Trump could be heard saying things about women like, "You know I’m automatically attracted to beautiful — I just start kissing them. It’s like a magnet. Just kiss. I don’t even wait. And when you’re a star, they let you do it. You can do anything.” He also described grabbing women by the most private parts of their anatomies. He later dismissed the tape as "locker room talk," and then, at the debate, as "just words." But words build up over time, and Trump has a long history of talking about women as "dogs" and "fat pigs," as well as rating them based on their physical attributes, and more. Words like these demean the people they are used to describe, and take away their personhood. Words influence actions.

No one says it better than J.K. Rowling, who knows the power of words about as well as anyone:

To Trump, words are seemingly meaningless. He thinks he can throw them around without anything to back them up. Anyone who doubts that can go to Politifact, an independent fact-checking organization, and look at Trump's file, which rates 17 percent of his statements as "Mostly False," 35 percent as "False," and 17 percent as "Pants On Fire." Far more than half of what he says to the public is untrue. But people believe words, because words are supposed to mean something. When someone violates the implicit understanding that words should be backed up in reality, it can create dangerous ripples.

And when someone feels that he can use demeaning words with no consequences, that creates dangerous ripples too.

In the beginning of the debate, an audience member asked the two candidates if they thought they were good role models for the youth of America. As Clinton later said, "Children listen to what is being said." The youth of America are paying attention. When a man who could possibly become the president speaks about half of the population as objects for his amusement, young people soak that attitude up, and it can affect the way that they act in the world. Boys could start to believe it's okay to treat women as second-class citizens. Girls could start to believe it's okay for them to be treated that way.

It's not okay. Words matter.