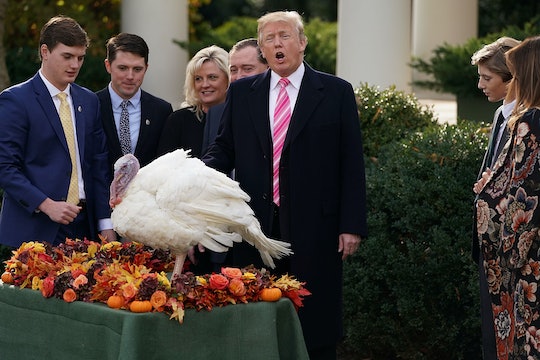 Trump's Jokes At The Presidential Turkey Pardon Were Pretty Political

Trump pardoned two presidential turkeys today at a ceremony held in the White House Rose Garden. The annual turkey pardon is a highly anticipated and wholesome event performed the week of Thanksgiving by the sitting president. Usually politics has nothing to do with the pardon, but not for Trump. He decided to throw a few jabs at the Democrats during the ceremony. Trump's jokes at the presidential turkey pardon were pretty political and people have had a lot to say about them.

This year, people could vote for one of two 40-pound-turkeys, Peas or Carrots, to receive the pardon with voting held in a poll on the White House website. The vote was split evenly between Peas and Carrots, meaning that both were lucky enough to receive a pardon.

“The winner of this vote was decided by a fair and open election conducted on the White House website,” Trump said, as reported by NBC News. "Unfortunately Carrots refused to concede and demanded a recount. And we’re still fighting with Carrots.”

Without saying it outright, Trump may have been referring to the tight gubernatorial and senate races in Florida, which were called in favor of the Republican candidates, but only after a highly publicized recount. The gubernatorial race in Georgia was similarly close, and Democratic candidate Stacey Abrams refused to concede.

And he didn't stop there. He went on to call out the Ninth Circuit Court of Appeals and the incoming House of Representatives, in which the Democrats will have a majority.

Even though Peas and Carrots have received a presidential pardon, I have warned them that House Democrats are likely to issue them both subpoenas. Unfortunately I can't guarantee that your pardons won't be enjoined by the Ninth Circuit. Always happens.

Many also drew connections to Trump's recent decision to not take any further action against Saudi Arabia's Crown Prince for the death of Washington Post journalist Jamal Khashoggi in Turkey, according to CNN. His official statement on the issue came just one hour before the turkey pardon.

For some, they wondered which Turkey Trump was really pardoning.

Others merely commented on the way a seemingly wholesome, bipartisan event could take such a fast turn for the worst.

Despite all the fuss, Peas and Carrots are probably very happy to have received the pardon. Last year, 44 million turkeys were served up as Thanksgiving Dinner in the United States, according to CNN.

So where did these turkeys come from? The National Turkey Federation raises a flock of presidential turkeys of 48 birds every year, according to HuffPost. Then two are chosen based on their personality, looks, and demeanor.

As for Peas and Carrots? They're headed to Gobbler's Rest at Virginia Tech and the Department of Animal and Poultry Sciences, where all the other pardoned turkeys go to live out the rest of their days, according to HuffPost.

Abraham Lincoln was the first recorded president to perform a turkey pardoning, according to White House History, although there's still a debate about that, with some people saying it was actually Harry Truman. But it was President George H.W. Bush who formalized the ceremony in 1989, according to NPR.