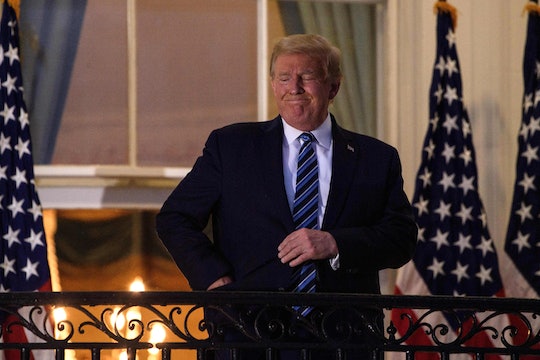 President Donald Trump claimed in a tweet, without evidence, that Democratic presidential nominee Joe Biden supports "late term" abortions, including those performed "right up until the time of birth and beyond." This isn't the first time Trump has attempted to spread this narrative. However, Trump's claim that Biden supports "late term" abortion doesn't hold up when fact checked and instead is a wildly misleading misrepresentation of Biden's support for the landmark Supreme Court ruling in Roe v. Wade.

"Wow. Joe Biden just took a more Liberal position on Roe v. Wade than Elizabeth Warren at her highest," Trump wrote in a series of tweets posted Tuesday. "Biden and Democrats just clarified the fact that they are fully in favor of (very) LATE TERM ABORTION, right up until the time of birth, and beyond - which would be execution. Biden even endorsed the Governor of Virginia, who stated this clearly for all to hear."

There's undoubtedly a lot to unpack here, but let's begin at the top with Trump's claim that Biden has since taken a more liberal position on Roe v. Wade than Sen. Warren. While speaking with voters at a socially distanced town hall event in Miami, Florida, on Monday, Biden said he would work to pass legislation aimed at codifying Roe v. Wade into federal law should Trump's Supreme Court nominee Amy Coney Barrett vote in favor of overturning the landmark ruling that protects people's choice to have an abortion.

"We don't know exactly what [Barrett] will do, although the expectation is that she may well move to overrule Roe," Biden said. "The only responsible response to that would be to pass legislation making Roe the law of the land. That's what I would do."

During the Democratic presidential primary, Sen. Warren told The Washington Post she believed there should be no restrictions on abortion at any point during a healthy pregnancy. Biden, however, told the paper he supported following the viability standard outlined in Roe v. Wade, which notes that states may enact restrictions on abortion after a fetus reaches viability. Because the president failed to present any evidence, it's unclear how Trump came to conclude that Biden holds a more liberal position than Warren when it comes to Roe v. Wade.

The second half of Trump's tweet suggests Biden's support for abortions performed up "until the time of birth, and beyond" can be found in his endorsement of Virginia Gov. Ralph Northam.

Speaking in defense of then-proposed legislation aimed at rolling back strict abortion regulations by reducing the number of doctors needed to certify a late-term abortion from three to one, Northam told WTOP in 2019 that an abortion in the third trimester — something that was, at that time, already legal under Virginia state law — might occur in cases where a fetus was nonviable or there were severe deformities. "The infant would be delivered; the infant would be kept comfortable; the infant would be resuscitated if that's what the mother and the family desire, and then a discussion would ensue between the physicians and the mother."

Trump has repeatedly twisted Northam's words to falsely claim Democrats support "executing" newborns. According to The Washington Post, Trump falsely claimed "virtually every Democrat candidate" had declared "unlimited support for extreme late-term abortion, ripping babies straight from the mother's womb, right up until the very moment of birth" while speaking to supporters at a campaign rally in March. And although Biden did endorse the governor during Northam's campaign in 2017, he's since called for Northam to resign, according to USA Today.

"As usual, he turns to falsehoods and incendiary rhetoric whenever he faces criticism for his failed presidency," NARAL tweeted. "It's his tried and true tactic when he’s down in the polls and worried about reelection."