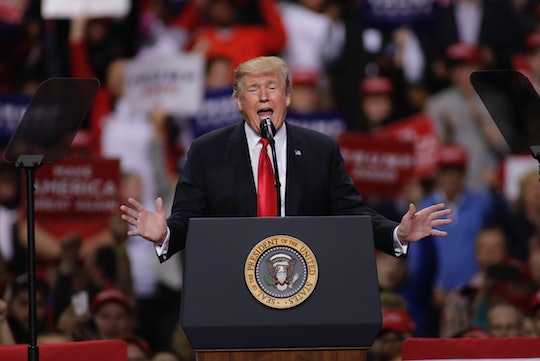 As the 2020 presidential race takes off, hopeful candidates are already launching campaign trails and fortifying their policy platforms. However, President Trump’s bid for reelection is unsurprisingly starting to look like a repeat of his 2016 run, a campaign that was constructed on inflammatory rhetoric and misinformation. Trump’s latest comments about “extreme late-term” abortion made during a rally on Saturday show that the President continues to spread false information, this time about women’s health care and rights.

His comments came on Saturday night at a rally in Green Bay, Wisconsin as he spoke to a crowd of cheering supporters about what he called “extreme late-term abortion.” “The baby is born, the mother meets with the doctor, they take care of the baby,” the President began. “They wrap the baby beautifully, and then the doctor and mother determine whether or not they will execute the baby.”

In a graphic and gross mischaracterization of late-term abortion, which has in the past been used in politics to demonize those who choose to terminate pregnancies, the President spoke of infanticide while hand-motioning knife movements. In reality, the late termination of a pregnancy is not clearly defined and is often disagreed upon by health experts. While some sources define 16 weeks of pregnancy as “late,” others say post-viability (or when the fetus can survive outside the uterus and the termination is "late") is at the 24th or 27th week of gestation.

However, regardless of its definition, the Center for Disease Control and Prevention (CDC) says that fewer than 1.3 percent of abortions actually take place after 21 weeks of pregnancy.

Still, Trump's false claims could have an impact on policy, voters, and even health care professionals and women receiving reproductive care. “Rhetoric of this type reflects a profound lack of understanding and knowledge about health care,” the American College of Obstetricians and Gynecologists (ACOG) told Romper. “The false claims by President Trump are grossly misleading and inappropriate interference into medical care. It is an insult to suggest that clinicians who provide abortion care to their patients are anything less than exceedingly professional, expert, and accurate in their approach to delivery of care.”

The ACOG also points out that this kind of misinformation overlooks the “complex and nuanced” approach by health care providers dealing with separate and unique pregnancies.

NARAL Pro-Choice America, an organization that advocates for abortion access, says Trump's inflammatory language also vilifies women and families who are faced with trying circumstances. "Sometimes, later in pregnancy, a woman gets a diagnosis of a serious health complication that threatens her life or health. Other times, a family learns later in pregnancy [that] there is a very serious fetal anomaly," NARAL's President Ilyse Hogue says. In these cases, Hogue points out, parents and the medical staff attending to the families are faced with "unbearable" choices that Trump grossly mischaracterized.

The Executive Director and CEO of MomsRising, an organization that tackles critical issues facing women and mothers including maternal justice, Kristin Rowe-Finkbeiner tells Romper that Trump’s latest inaccurate claims is part of a greater effort to limit women’s rights and prevent accessible and affordable reproductive healthcare. “What President Trump said about abortion in Wisconsin this weekend was an outright lie — another example of him shamefully inflaming tensions and pitting people against each other,” Rowe-Finkbeiner says.

Trump’s false claims at the Wisconsin rally are not the first of their kind. At the State of the Union in February, Trump mischaracterized New York legislation that would allow women to receive abortions after 24 weeks of pregnancy if her health or life is at risk, or if the fetus is not viable. "Lawmakers in New York cheered with delight upon the passage of legislation that would allow a baby to be ripped from the mother's womb moments before birth,” Trump said about the abortion law. “These are living, feeling, beautiful babies who will never get the chance to share their love and dreams with the world.”

However, the legislation he mischaracterized clearly states that it would only allow abortions past 24 weeks of gestation if “necessary to protect the patient’s life or health” or if there is an “absence of fetal viability.”

The White House has not responded to Romper's request for comment.

Trump’s repeated mischaracterization and false inflammatory rhetoric suggest that, if reelected, not much would change in his second term of presidency in way of women’s healthcare and reproductive rights.