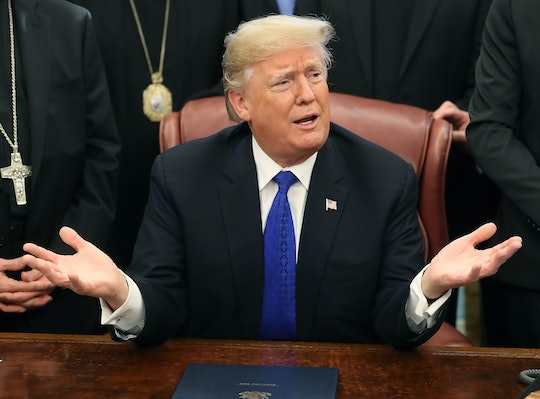 It seems like just yesterday that Twitter users had a field day over something Trump tweeted. That's because it was just yesterday. And while today is a new day, he's managed to bring himself under the same fire that continues to follow him with many of his tweets. So what did it this time? Hint: it has to do with his choice for the next White House chief of staff and an unfortunate case of bad grammar. Trump's latest tweet about the open chief of staff job has Twitter users having fun at his expense.

It all started Tuesday morning, when various media outlets started reporting that Trump could not find a replacement for White House Chief of Staff John Kelly. And worse yet, that no one wanted the position, according to HuffPost.

"Fake news has it purposely wrong. Many, over ten, are vying for and wanting the White House Chief of Staff position. Why wouldn’t someone want one of the truly great and meaningful jobs in Washington. Please report news correctly. Thank you!"

Read it how you will, but the Twitterverse thought it sounded like 10 year olds were being considered for the job, instead of 10 qualified candidates. While Trump meant the latter, it didn't stop over 52,000 people from weighing in on the matter.

Most keyed in on the fact that it sounded like a tween would some day take the job.

Some referenced yesterday's gaffe where Trump misspelled the work "smoking" as "smocking," in reference to a smoking gun.

Others wondered, is 10 even a number about which to be proud?

Trump was turned down by his reported first choice replacement, Nick Ayers, who is currently the Vice President Pence's chief of staff. And Kelly is expected to leave office at the end of this month, yet Trump says he's in no rush to fill the position, according to Politico. He spoke to reporters about this in an impromptu question and answer period in the Oval Office on Tuesday.

Some insiders think that his "no rush," stance means that he doesn't have many perspective takers, according to Politico. This may mean he will move back Kelly's departure date, the news outlet also noted. This will likely be hard, given how contentious Trump and Kelly's relationship has been over the past few months. After all, Kelly could never shake the rumor that he once called Trump an "idiot," which NBC News reported back in April.

It's been a long week in politics, and it's just Tuesday. Let's see what the rest of the week brings. Many eyes will be on Twitter, waiting to see what comes next.