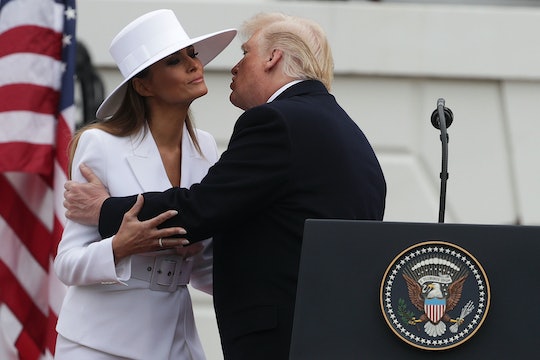 Mother's Day 2018 has arrived, and celebrities and public figures everywhere have taken the time to wish their own mothers (and all the moms in their life) a happy and relaxed day. But, Trump's Mother's Day message left out one very important thing, and people have definitely taken notice. Yes, even though the president took to social media on Sunday to wish his own mother a happy Mother's Day, the public was quick to notice that Trump didn't send any of his former or current wives well wishes on Sunday.

In a video message on Sunday, Trump took the time to explain how much he loved and appreciated his own mother, Mary MacLeod, who passed away in 2000. To be fair, Trump's message to his own mother was pretty heartfelt and loving, although Twitter users were quick to point out that the president had failed to mention any of the mothers of his own children by name in his official Mother's Day message.

"My fellow Americans," Trump began his video message, "this Sunday is one of the most important days of the year: Mother's Day. Since the earlier days of our republic, America's strength has come from the love and courage and devotion of our mothers." But then, it didn't exactly end well.

Now, looking back, Trump did, in fact, wish his wife, Melania Trump, a happy Mother's Day last year in a tweet, but again, he failed to mention either of his ex-wives, Ivana Trump who is the mom of Ivanka, Donald Jr., and Eric Trump or Marla Maples, who is the mother of Tiffany Trump. This year, though, in the midst of a growing number of reports that Trump has cheated on Melania numerous times, his Mother's Day message definitely fell flat. Yes, despite the growing number of reports that Trump had an affair with Stormy Daniels and then paid her hush money, the president hasn't attempted to put on a front about how things are going at home.

Romper's request for comment from the White House regarding the allegations was not immediately returned. Now, what Trump did say in his Mother's Day message to his own mom was pretty interesting. In part, Trump said:

My mother was a great person. Her name was Mary MacLeod. She came from Scotland and she met my father when she was very young. They were married for many, many years. I learned so much from my mother. She was just incredible. Warm, loving, really smart, could be tough if she had to be, but basically she was a really nice person.

Now, everyone will wish their mother a happy Mother's Day in their own way, and Trump's patriotic message on Sunday isn't necessarily indicative of relationship troubles with his wife. Continuing his message, Trump discussed the historic importance of moms in America. "They helped us gain our independence. Through their grit, determination and incredible spirit, they pioneered the West and settled the frontier. During World War II, America's mothers helped build the greatest arsenal for democracy."

So again, it wasn't exactly the most loving message, but it's worth noting that presidents typically take the opportunity to make somewhat of a political statement with all of their messages, including Mother's Day. Back in 2015, President Obama took the day to call three mothers from across America who had written him letters and wished them a happy Mother's Day, according to CNN. Obama's Mother's Day messages have also frequently featured encouragement towards the LGBTQ community and were incredibly inclusive. So, even though Trump's message to his deceased mom on Mother's Day was meant to be uplifting, many noticed that the president left out some significant moms in his life.