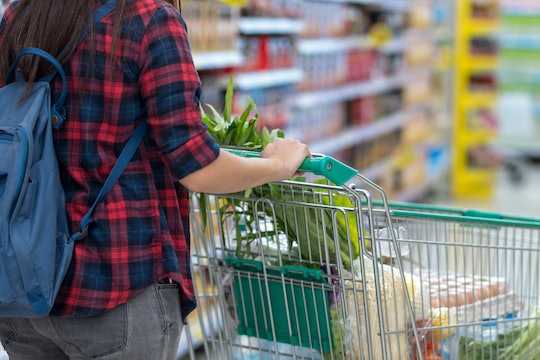 Just when you thought President Donald Trump couldn't be more out of touch with the American public, the Trump administration issued a concerning proposal regarding food stamps. And as CNN reported, Trump's new proposal could leave 3.1 million people without access to food stamps.

To catch you up to speed, the proposed rule was issued by the United States Department of Agriculture (USDA) Tuesday, and it reportedly aims to close a so-called "loophole" involving the Temporary Assistance for Needy Families program and Supplemental Nutrition Assistance Program (SNAP). The supposed loophole "enables people receiving only minimal benefits from the Temporary Assistance for Needy Families program to be eligible automatically for food stamps without undergoing further checks on their income or assets," according to ABC News.

Right now, 43 states allow automatic inclusion into SNAP, also known as the food stamp program, according to Mother Jones. The proposal's goal is to end this policy, and if it's enacted, it would make it that much harder for families to qualify for SNAP benefits. The proposal could affect 3.1 million people and 1.7 million households in total, according to ABC News,taking away much needed help for working families.

The worst part about this whole thing? If the proposal becomes a reality, it could make 265,000 school children ineligible for free lunches, according to NPR.

"This rule would take food away from families, prevent children from getting school meals, and make it harder for states to administer food assistance," Michigan Sen. Debbie Stabenow, the ranking member on the Senate Agriculture Committee, said to NPR.

The USDA did not immediately respond to Romper’s request for comment regarding the proposal.

Agricultural Secretary Andrew Perdue emphasized budget costs when discussing the proposal, noting the government stands to save $2.5 billion a year, according to the Federal Register.

"For too long, this loophole has been used to effectively bypass important eligibility guidelines. Too often, states have misused this flexibility without restraint," Perdue said in a statement. "This proposal will not only save money, but more importantly it preserves the integrity of the program while ensuring nutrition assistance programs serve those most in need."

What's interesting, however, is Perdue's failure to mention the $37 billion worth of tax cuts Trump helped pass for taxpayers earning $1 million or more, according to Bloomberg. Interesting.

Unfortunately, this is just one of several actions that would make it tougher for low-income families to receive federally funded aid for food, housing, medical expenses, and more, according to NPR. A proposal to strengthen work requirements for SNAP is currently pending, for example, requiring SNAP recipients to work at least 20 hours a week after just three months of assistance, a formality that most states currently waive, according to CBS News.

A full (and truly mind-boggling, I might add) list of Trump's proposals to strip aid and the status of these ideas were compiled by NPR, and if you have the time, the round-up is worth checking out. It's important to note, however, that many of these proposals are still pending, while others face legal challenges.

Bottom line: Food is a necessity and putting further restrictions on how aid is dispersed, as Trump's proposal reportedly intends, will have devastating consequences for low-income families.