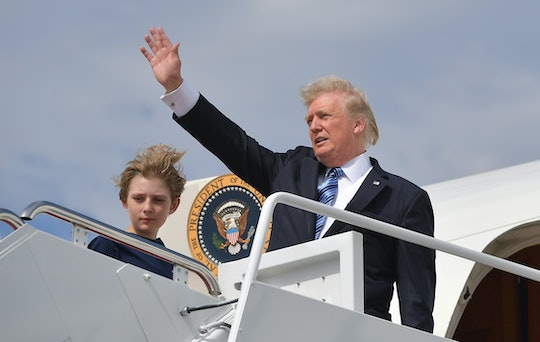 Trump's Quotes About Being A Father Are Upsetting

Even though Donald Trump has only been president for seven months, he's been in the public eye for decades. Before he was shockingly elected to the office of the president, Trump was a businessman, a real estate mogul, and a reality television star. On top of that, he is also a father of five children, and grandfather to eight. And while there are many a Trump quotes out there that do a great job pointing to the president's character, Trump's quotes about being a father are particularly revealing.

Of course, everyone knows that the Trump family is famously loyal, and defensive to a fault. But that doesn't necessarily mean that their actions are worth defending. And while it's still an honest shame that the president's literal advice to "grab 'em by the pussy" has been so heinously ignored, his past statements about fatherhood are actually quite troubling as well. Seriously, whether he was talking about Barron, Eric, Tiffany, Donald Trump Jr., or Ivanka, Trump's statements about parenthood are sexist, outdated, and perhaps even perverted.

However, if you don't believe me, take a look at some of Trump's most incredulous quotes about being a father, because they're not exactly what you would call heartwarming.

When He Made Some Troubling Remarks About Ivanka

Pretty much everyone knows that Trump doesn't exactly the best track record when it comes to women. But, his comments actually extend to his own children. Back in 2006, Trump told The View : "I've said if Ivanka weren't my daughter, perhaps I'd be dating her." And while, of course, it's natural for fathers to brag on their daughters, Trump's comments felt different.

When He Admitted He Doesn't Change Diapers

On the Opie and Anthony show in November 2005, Trump told host Anthony Cumia that he never changed a diaper. "If I had a different type of wife," Trump said, "I probably wouldn't have a baby, ya know, cause that's not my thing. I'm really, like, a great father, but certain things you do and certain things you don't. It's just not for me." He also said that men who changed diapers were "act[ing] like the wife."

When He Admitted That Parenting Wasn't Really His "Thing"

Speaking with Howard Stern on his show, Trump said "sitting at home with the baby" had "never really been [his] thing." He also described a time when his youngest son, Barron, was younger and had been playing at the park. He said Barron came home with a "sniffle," and subsequently Trump "wanted nothing to do with him."

When He Literally Compared His Adult Children To Each Other

In an interview with Fox and Friends last year, Trump dotted on his adult children. Well, most of them. "But I'm very proud," he began, "because Don and Eric and Ivanka and - you know, to a lesser extent 'cause she just got out of school, out of college - but, uh, Tiffany, who has also been so terrific." Yeah.

Seriously, Trump isn't the most inspiring of fathers out there. But is that really that surprising?