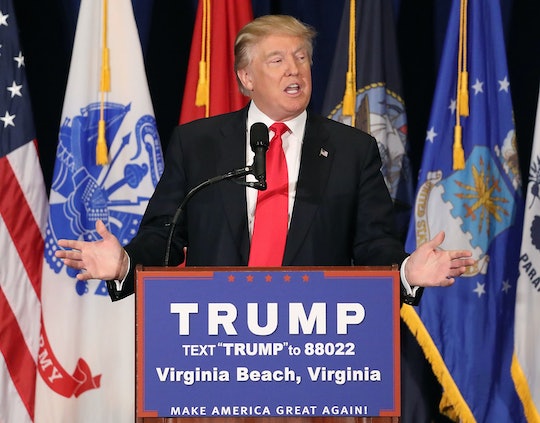 Not since Ross and Rachel, or Elaine and Jerry has the coming together of a man and woman been so hotly anticipated. After weeks of speculation, it finally happened. On Tuesday, Vermont Sen. Bernie Sanders finally endorsed presumptive Democratic nominee for president, former Secretary of State Hillary Clinton. And while Clinton and Sanders' appearance was intended to start bringing Democrats together, Donald Trump seized on the opportunity to try and stoke more discontent among liberals. Trump's reaction to Bernie Sanders endorsing Hillary Clinton painted Sanders as a sell-out to the establishment.

The real question is whether Sanders' voters agree with Trump's assessment. Sanders endorsed Clinton in a statement on Tuesday, according to NPR.

Secretary Clinton has won the Democratic nominating process, and I congratulate her for that. She will be the Democratic nominee for president and I intend to do everything I can to make certain she will be the next president of the United States. ... I have come here today not to talk about the past but to focus on the future. That future will be shaped more by what happens on November 8 in voting booths across our nation than by any other event in the world. I have come here to make it as clear as possible as to why I am endorsing Hillary Clinton and why she must become our next president.

But the moment, which ended weeks of uncomfortable tension between the Clinton and Sanders' camps, wasn't all puppies and rainbows. Trump, who has been looking to woo Sanders' supporters to his candidacy, didn't waste much time bashing Sanders' endorsement of Clinton by saying he "sold out."

But what Trump calls "selling out" is the result of hard negotiations with the Democratic National Committee and the Clinton campaign to adopt key aspects of the Sanders agenda in return for his support. Free college tuition at state colleges, an idea Sanders proposed throughout the primary campaign and Clinton expressed reservations about, according to the New York Times, is just one of the agenda items Clinton is now championing as a result of pressure from Sanders.

Clinton and the DNC have also adopted popular Sanders planks including a federal $15 minimum wage, climate change initiatives, and healthcare reform aimed at creating a single-payer system, according to CNN.

Sanders didn't get everything he wanted, though. CNN reported Sanders wanted specific opposition to the Trans-Pacific Partnership trade deal, the kind of policy which Sanders has said hurts American workers. The DNC, CNN adds, wasn't willing to embarrass President Barack Obama, who championed the agreement.

So while Trump called Sanders a "sell out" a top Sanders aide, Warren Gunnels said "we got 80 percent of what we wanted," according CNN.

Let's also remember, Sanders lost, fair and square. But his supporters have emerged as a powerful progressive force that Sanders spent weeks leveraging to the greatest benefit he could. Instead of coming out of the primary with nothing but a loss, he achieved 80 percent of what we wanted.

Pretty good deal for a sell out, if you ask me.