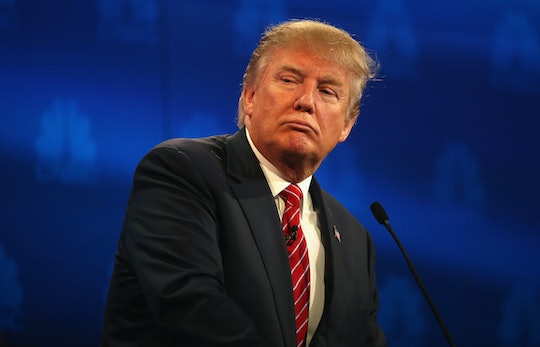 When Hurricane Harvey hit Southeast Texas Friday, it brought heavy rain that has caused "historic flooding" in Houston and the surrounding areas, according to The Weather Channel, and at least five people are now thought to have been killed by the storm. Texas Gov. Greg Abbott ordered mass evacuations and has sent 4,000 members of the national and state guard to assist with rescue efforts, but experts are predicting that the storm's impact could last for years to come. President Donald Trump will reportedly head to Houston on Tuesday, but so far, Trump's response to Hurricane Harvey has been pretty weak. And it's left many people frustrated over what they feel is his lack of leadership in the wake of a major crisis.

You don't have to look very far to at least get an idea of the kind of devastation that the people of Houston are facing right now — social media is full of photos and video depicting the catastrophic flooding, and on Monday, Federal Emergency Management Agency (FEMA) Administrator Brock Long told USA Today that more than 30,000 people are expected to need shelter as a result of the storm. Former FEMA head Michael Brown also weighed in on the situation, and told CNBC that he believed the economic impact of Hurricane Harvey will be "much higher" than that of Hurricane Katrina (and given that the 2005 storm caused as much as $150 billion in total economic damage, that's a pretty big deal). But Trump's tweets since the storm hit Friday don't exactly send a message that he's got the situation under control, and many Americans are unimpressed.

On Friday, Trump tweeted that he'd been briefed on the hurricane, and had traveled to Camp David, where he was "monitoring the path and doings of Hurricane Harvey." He later tweeted that he had "signed the Disaster Proclamation, which unleashes the full force of government help," and marveled at the hurricane's wind speeds. But he then switched gears to announced that he'd made the highly-controversial decision to grant a full pardon to Joe Arpaio, whom Trump called an "American patriot."

A day later, Trump's tweets were mostly more of the same: he praised the teamwork and coordination of officials in Texas, thanked volunteers, and tweeted that things were, "so far, so good!" thanks to the "fantastic people on the ground." But on Sunday, the president tweeted a plug for Sheriff David Clarke Jr.'s book, Cop Under Fire, calling it, "a great book by a great guy," and then penned a few more tweets where he marveled at the flooding, boasted about his 2016 election win in Missouri, once again vowed to build a giant wall, and griped about NAFTA renegotiations. In fact, of the four tweets he sent out Monday morning, only one was Harvey-related (he re-tweeted Abbott's message of thanks to the Texas National Guard). The rest? A re-tweet dig at The Washington Post over its "antifa" coverage, a re-tweet dig at President Barack Obama, and, uh, a re-tweet of a Mother Teresa quote from an account called "Inspirational Quotes."

In an article for Vox on Sunday, emergency management expert Dr. Samantha Montano wrote that the good news at least is that Trump's initial response to Hurricane Harvey actually matters much less than how he manages the recovery effort in the weeks and months to come. Specifically, Montano said that since Trump has already signed the Texas disaster declaration — his first major responsibility — Trump's next tasks will be listening to his advisors going forward, ensuring they have adequate resources, and then working to help prepare and shape policy for future hurricane responses.

How Trump will handle that is still to be seen, but there is one other role the president is usually expected to take on after a disaster — and it's one that, so far, people haven't exactly been happy with. According to Montano, presidents "typically use their role to demonstrate leadership, compassion, and clear communication," after a major hurricane, but many on social media seem skeptical that he's even capable of doing that.

In fact, many on social media have argued that President Barack Obama's Hurricane Harvey tweet has already proven to be far more presidential than any that the actual POTUS has shared so far. On Sunday evening, Obama tweeted a message of thanks to first responders and volunteers, noting that helping in an emergency is "what we do as Americans." He then offered up a link to the American Red Cross as "one way you can help now."

Granted, the nature of a severe hurricane means that, regardless of what Trump — or anyone else — says right now, the situation is going to continue to be a serious concern, and there's no question that there are many people working really hard to help as many people as possible right now. But it's also clear that the president's response — not to mention his ability to appear poised, calm and in control in the wake of a crisis — really matters. And given that Trump has yet to actually address the nation directly, he might at least want to make sure that his tweets are on point.