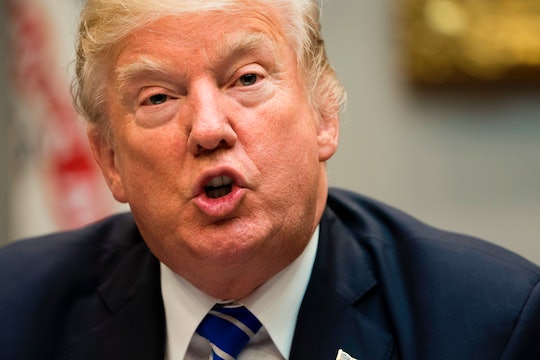 Trump’s Response To Puerto Rico After Hurricane Maria Is, Yet Again, Inappropriate

President Trump is causing outrage yet again with his tone-deaf comments on a very serious matter. On Monday, Trump took to social media to post about Puerto Rico's financial issues, which seemed just a tad out of place considering the devastation wrought by Hurricane Maria. So the question remains: Is Trump's response to Puerto Rico after Hurricane Maria a genius deflecting tactic?

Hurricane Maria ravaged Puerto Rico last week, leaving the island in what many are calling "apocalyptic devastation," according to CNN. With winds rivaling that of Hurricane Irma and flooding on the scale of Hurricane Harvey, it's not hard to imagine. Gov. Ricardo Rosselló has said Puerto Rico is on the brink of a humanitarian crisis, urging Congress to act now to help American citizens. "We need something tangible, a bill that actually answers to our need right now," Rosselló said. "Otherwise, there will be ... a massive exodus to the (mainland) United States."

Although President Trump has remained relatively silent on the devastation in Puerto Rico, he finally took a break on Monday from tweeting about NFL player protests to bring it up. Just not in the way that many had hoped. In a series of tweets, he wrote:

Texas & Florida are doing great but Puerto Rico, which was already suffering from broke infrastructure & massive debt, is in deep trouble ... It's [sic.] old electrical grid, which was in terrible shape, was devastated. Much of the Island was destroyed, with billions of dollars ... owed to Wall Street and the banks, which, sadly, must be dealt with. Food, water and medical are top priorities — and doing well.

Um, why is Trump even bringing up the island's broken infrastructure and debt when there are millions of people without homes, electricity, food, or water?

This isn't the first time Trump's response to a major event has fallen short. Not by a long shot. In fact, this is exactly why even more NFL players have been protesting in the first place. While our president defends the idea of patriotism, he's blatantly ignoring our right and duty to peaceful protest. Except ... wait a minute. He defended the free speech and protesting rights of violent protestors in Charlottesville. But athletes who silently take a knee — to send a clear message about racism in the U.S. — during the national anthem are called disrespectful and out of line? It just doesn't add up.

Trump calling out San Francisco 49ers quarterback Colin Kaepernick for sitting or taking a knee during the national anthem was the last straw for many NFL teams, owners, and players. According to TIME, our president told the crowd at an Alabama rally:

The response on Sunday?

Of course, players protesting the national anthem isn't exactly a new thing. But Trump managed to bring it back in the spotlight at a pretty convenient time — in the midst of Republicans trying to pass the Graham-Cassidy bill. In their latest attempt to repeal and replace the Affordable Care Act, Sens. Lindsey Graham and Bill Cassidy introduced legislation that would cause millions of Americans to lose their health coverage. Not to mention, it would "radically re-structure and deeply cut" Medicaid, according to the Center on Budget and Policy Priorities, as well as increase out-of-pocket costs for individual market consumers.

Thankfully for so many Americans, this bill seems to have been killed ahead of the Senate's Sept. 30 decision — thanks to Sen. Susan Collins announcing she would vote "no." Still, you have to hand it to President Trump: His political deflecting game is on point.