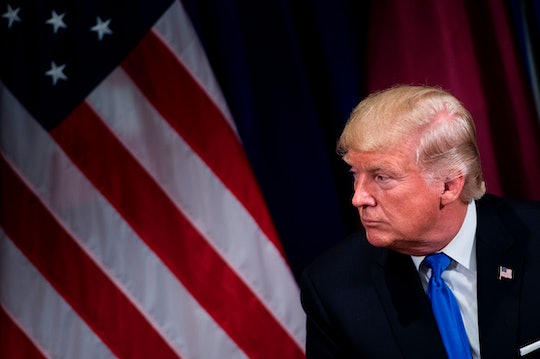 Trump's Response To The Mexico City Earthquake Is Basically Useless

It's no secret that President Donald Trump is a huge fan of communicating via Twitter, so it's not surprising that, following Tuesday's deadly 7.1-magnitude earthquake in Mexico City, the POTUS used social media to join the rest of the world in voicing his support. But given that this is also the man who once claimed that the people coming into the United States from Mexico were rapists and drug dealers, and who literally ran for president on a platform that promised to build a giant border wall at Mexico's expense, it probably also shouldn't be surprising that Trump's response to the Mexico City earthquake was two lines long, and, well, totally underwhelming. And even though the earthquake happened only Tuesday, and the search for survivors is still ongoing, Trump has since tweeted or retweeted more than a dozen other posts — including a few about how great he is, and one about the supposedly-bad ratings at the Emmy awards — that, at this point, you'll have to scroll pretty far down his Twitter feed to even find his remark.

On Tuesday afternoon, Trump tweeted, "God bless the people of Mexico City. We are with you and will be there for you," and, to his credit, at least it was a pretty speedy public acknowledgement. That's likely due to the criticism the president faced, though, following a separate 8.1-magnitude earthquake in Mexico earlier this month, according to The Independent, after which Trump reportedly waited nearly a week to call Mexican President Enrique Peña Nieto (though he's since claimed the delay was due to a poor mobile phone connection).

To be clear, it's important that Trump moved quickly to acknowledge the devastating earthquake that left more than 200 people dead, according to NBC News, including at least 25 students and staff at a collapsed Mexico City school. But the president's tense — and honestly, pretty offensive — relationship with Mexico makes it hard to find his words even sort of reassuring or complimentary.

In the wake of a disaster, it's a pretty standard expectation that world leaders would offer their public support, particularly if they literally share a border. But after Hurricane Harvey hit the United States in August, Mexico responded not only by offering well-wishes, but by sending aid in the form of Red Cross volunteers, food, and supplies, according to Reuters. At the time, Mexico Deputy Foreign Minister for North America Carlos Sada called the assistance "a demonstration of our neighborliness," and "a show of solidarity,” adding, "if it were the other way around, I think they would help us, too."

The Trump administration has so far made no mention of plans to offer aid to Mexico following the two massive earthquakes, but as many have already pointed out on social media, that's not entirely hard to believe given Trump's previous insistence on taking a hard-line approach to Peña Nieto's repeated refusals to foot the bill for the proposed border wall.

After all, Trump has made no secret, for example, of his opinion on the relationship between the two countries:

While others noted that his "prayers" wouldn't really do a whole lot:

And many also took issue with the fact that his lone tweet supporting Mexico didn't seem like a whole lot given the subject matter of his subsequent tweets:

Perhaps the worst part of Trump's response though is not even what he said, but the fact that it seems as though most people have already written it off as totally insincere. So far, that seems like a pretty reasonable conclusion to come to, which is beyond infuriating (I mean, he's literally the POTUS). But regardless of what Trump has said about Mexico in the past, and regardless of his campaign and his policies (not to mention his general reluctance to show actual support to the country despite the fact that it's been rocked by two huge disasters), the fact still remains that he totally still has the opportunity to do the right thing. And if he really means what he said about being there for the people of Mexico City, he could easily prove it, by announcing the country's commitment to helping out with aid, for example, or at least offering up more than a tired, half-hearted tweet about thoughts and prayers.

Donald Trump has once again been given an opportunity to step up and be the kind of leader than many Americans hoped he would be. While no one really seems to be holding their breath that he'll actually come through, it would now definitely be as good a time as ever if he really intended to stand behind his words.