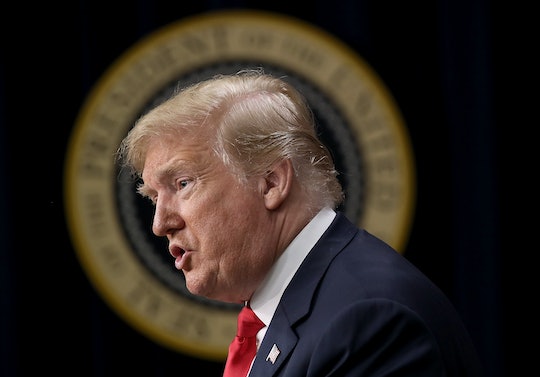 Following U.S. Supreme Court Justice Anthony Kennedy's retirement announcement on Wednesday, President Donald Trump told reporters he would pick a replacement "as quickly as possible" — a prospect that's frightening to many Americans. Making matters even more frustrating is Trump's decision to choose a replacement based on a list of 25 potential nominees, all of whom are conservative, according to NPR. Here's everything you need to know about Trump's SCOTUS nominee list, including their positions on important cases like Roe v Wade.

It's no secret Trump hopes to replace Kennedy, who will step down on July 31, before midterm elections in November. Senator Majority Leader Mitch McConnell essentially said he hopes for the same situation during a speech on Wednesday. "The Senate stands ready to fulfill its constitutional role by offering advice and consent on President Trump's nominee to fill this vacancy," McConnell said, according to USA TODAY. "We will vote to confirm Justice Kennedy's successor this fall."

As for who will fill the vacancy, Trump confirmed the pick will be chosen from his list of 25 potential nominees, according to CBS News. Here is the full list, according to the White House:

Once you narrow down the list of 25 to five potential candidates, it's easier to see how Trump is committed to picking a judge who will uphold his conservative agenda. That being said, here's what you should know about each frontrunner.

When it comes to common sense gun laws, 52-year-old Hardiman is not the person you want serving on the Supreme Court. In the 2013 case of Drake v. Filko, Hardiman ruled that the state of New Jersey violated the Second Amendment by requiring its citizens to demonstrate a "justifiable need" for a permit to carry a handgun, according to The Hill.

Although Hardiman hasn't spoken out on abortion rights, he did agree to vacate the "conviction of an anti-abortion protester who was arrested for refusing to move away from the sidewalk in front of the Liberty Bell Center in Philadelphia," according to SCOTUS Blog.

Unfortunately, 56-year-old Pryor is someone who is in favor of overturning Roe v. Wade. In fact, Pryor referred to the ruling as the "worst abomination in the history of constitutional law," according to The Cut. Sigh. There simply are no words.

On another note, however, Pryor agreed with a judge who ruled that "Georgia officials violated the equal protection clause when they fired an employee for being transgender," according to SCOTUS Blog. It seems like Pryor is all over the map where it concerns his opinions and rulings.

Similarly to Hardiman, 49-year-old Thapar hasn't said much on Roe v. Wade. Thapar is more vocal where it concerns drug offenses, however, and he believes minor offenses should receive harsh minimum sentences.

Additionally, Thapar "rejected a same-sex sexual harassment and retaliation claim because he believed the worker didn’t show he was harassed because of his gender, despite his harasser groping him and making repeated sexual comments that referenced his gender," according to The Alliance for Justice.

In short, Thapar is a predictable conservative pick.

Larsen is a concerning pick due to her views on LGBTQ rights. The 49-year-old "voted against hearing an appeal by a lesbian mother who sought parental visitation from an ex-spouse" who she lived with before gay marriage was legalized, according to Civil Rights.

As where it concerns abortion rights, Larsen was endorsed for the Supreme Court by the "anti-choice Michigan Right to Life," according to Rewire.News. Need I say more?

Out of all of the frontrunners, 46-year-old Barrett might be the most conservative out of the bunch. Barrett has said abortion is “always immoral," according to Civil Rights, and she's also against same-sex marriage.

All in all, Barrett is a devout Catholic who often cites religion in her rulings. Given Barrett's young age and her inability to separate church from state, she's a concerning pick.

In response to these frontrunners and Trump's list of potential SCOTUS nominees, a campaign called "Ditch The List" started trending on social media. Ditch The List's mission is as follows, according to the campaign's website:

The next nominee to the Supreme Court could shift the ideological balance of the court for a generation or more. Americans deserve to know the full views of the individuals President Donald Trump is considering for any potential vacancy. “Ditch the List” is a project that works to educate the public about Donald Trump’s publicly announced list of potential nominees for the Supreme Court. We spotlight the past writings and decisions of these individuals in order to show that, rather than representing an independent check on the executive branch, these judges share Trump’s views on most key issues and would side with him reliably if elevated to the Supreme Court. Americans overwhelmingly believe our judges should approach their job in a neutral way and strive to uphold the rule of law, not bend to any extreme ideology ...

Supporters of Ditch The List are urging citizens to call their Senators about Trump's potential nominees.

"Do not think the decisions my the Supreme Court will not affect you. Call your Senators and tell them to DITCH THE LIST," one person penned. "Don’t think SCOTUS won’t come for you! Say something! #ditchthelist."

There's no denying concerned Americans need to act in the coming weeks and months before Trump makes his nomination. In addition to staying informed about Trump's list of nominees, it's important people urge their representatives to wait until after midterm elections to confirm Kennedy's replacement. A lot is at stake at the moment, and this is not the time to stay quiet.