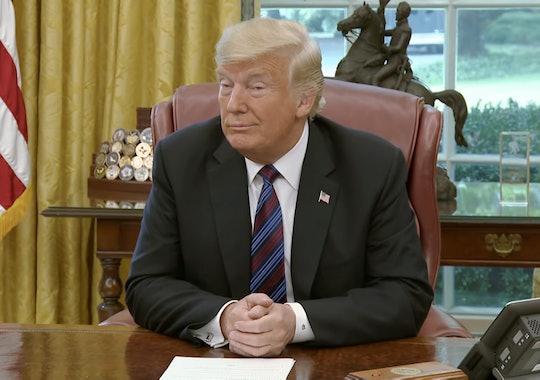 President Trump's Speakerphone Fail Memes Will Crack You Up

To be completely honest, there's no shortage of comedic fodder coming out of the White House lately. In just the past couple of days, there's been enough inspiration to create a full-length HBO standup special, if one were so inclined. But Trump's speakerphone fail may be his funniest meme yet, because not only is it delightful to watch in its original format, there's seemingly no possible way to spin it that doesn't add to the humor. To wit: one Twitter user mashed it up with the closing credits of Veep, a program I've never even seen (it's on my list, I swear) and I still found it very enjoyable. For what it's worth, so did the show's star, Julia Louis-Dreyfus, according to Deadline Hollywood.

But before you get to the jokes, dubs, and mash-ups, you'll want to see the raw, unedited footage. Some outlets cut out a good portion of the president's fumbling, possibly in order to paint him in a more flattering light, or maybe just for the sake of brevity, depending on the source. But surprisingly, the same administration that's known for allegedly deleting web pages, shredding official documents, and blocking people on Twitter, has mercifully posted the entire comedy of errors on YouTube.

Even before Trump began his befuddled poking and prodding of a very basic piece of office equipment, he was off to a good start, attempting to pump up the small crowd in the Oval Office as they bore witness to his phone call with Mexican president Enrique Peña Nieto, during which the two discussed their new trade deal.

It was a "big day" and a "tremendous thing," Trump announced. He brought up his favorite source, "a lot of people." He delivered a few of his trademark grammatical peculiarities, like "we all negotiate tough" and "we look very much forward to it." But when it came time to operate a device besides his unsecured iPhone, that's when the real fun began.

As the world looked on, Trump jabbed helplessly with his "normal," "strong," "great," "fine," "good size," "slightly large, actually" fingers, desperately trying to create the impression that it was somehow his staff's fault that he didn't know how to access the correct line.

Here's a transcript of the entire debacle, once again published by the weirdly conscientious White House staff. I've added notes for clarity:

To crowd: I believe the President is on the phone...

To an unknown staffer: You can hook him up. Tell me when.

To an unknown, unfortunate, and likely unwilling accomplice: How are you? It's a big thing. A lot of people waiting.

To a staffer who deserves more respect: Do you want to put that on this phone, please?

To a staffer whom I would absolutely not blame for spitting in his boss' Diet Coke: Be helpful. [Smirks, raises eyebrows, looks exactly like every condescending loudmouth you've ever seen berating an Applebee's employee.]

Clearly, if you watch the video as many times as I did, your righteous indignation will start to overtake your amusement. Everyone knows it's not that guy's fault you can't pick up a call on Line 1, dude! You're embarrassing yourself; not him! Nobody gets paid enough to be the scapegoat for a man who, despite being a very stable genius who is definitely a billionaire thanks to his own brilliant business skills and certainly not family money, can't handle the single most simple, yet essential business tool.

Whew. I guess that's why we have jokes, right? Because laughing will, at worst, make your sides ache for a but a moment, while rage-ulcers can last for months. Sometimes Twitter can actually be a good thing.