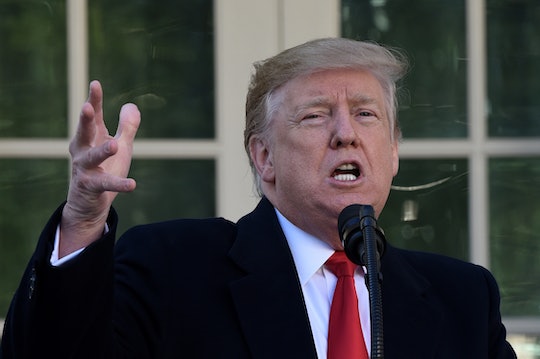 After its original Jan. 29 date was postponed because of the longest government shutdown in U.S. history, the State of the Union address kicked off at 9 p.m. (ET) on Tuesday, Feb. 5. President Donald Trump began his speech before a joint session of congress, as millions of viewers tuned in from across the nation — and from around the world. One thing became incredibly clear right from the get-go: Trump's tie was crooked. Like, incredibly crooked. And Twitter basically had a field day.

It didn't matter which network or what streaming location you chose in order to watch the State of the Union address because all of them showed the exact same thing — a severely crooked red tie. Seriously, though. Whoever was in charge of the president's wardrobe on Tuesday evening managed to drop the ball on this one. (Why didn't anyone tell him to fix it on his way in?)

Trump didn't even have to open his mouth as he stepped up to the podium for Twitter to take one look at his tie and run with it, Time reported. For many, the lopsided tie was so distracting, that it was the only thing they could concentrate on throughout the duration of Trump's speech, Newsweek reported. Others took it as an opportunity to relate it to his time as president. One Twitter user wrote, "Just like his presidency, Donald Trump's tie is incredibly crooked tonight #SOTU."

Another Twitter user wrote, "Someone please fix @realDonaldTrump’s tie. I cant watch this terrible speech and stare at a crooked tie. Please. It’s too much. #SOTU."

Yet another person chimed in with, "@realDonaldTrump Your tie is crooked trump. Dear God please fix it. You look deranged. #StateOfTheUnion2019 #TieGate."

Another Twitter user pointed out, "Not one person told this man that his tie was crooked."

"Trump’s giant red power tie is crooked and none of his people had the guts to tell him. A perfect metaphor for his presidency," yet another Twitter user wrote.

In Trump's defense, you can always leave it to Twitter to fixate on one detail and run with it. Last year, viewers couldn't help but notice something else about Trump that seemed both a little "off" and incredibly irksome: That he kept clapping into the microphone for himself, according to USA Today.

Personally, I think Trump's crooked tie during the State of the Union address this year was infinitely less distracting than his clapping into the microphone last year. With that said, there were far worse things that went down during his speech both years. (Fear-mongering about immigrant murder and his attack on late-term abortion, just to name a couple.)

Maybe that's precisely why Twitter hones in on these inconsequential things in the first place: To distract them from what is actually coming out of Trump's mouth. And I don't blame them in the least.