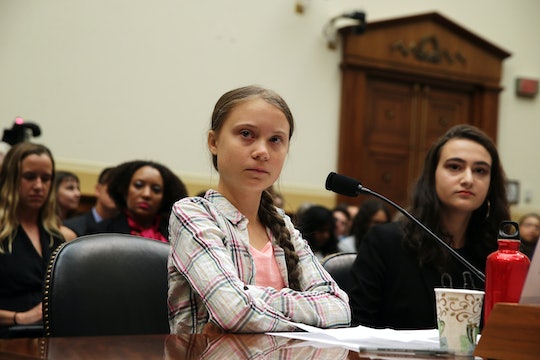 The Earth is rapidly approaching an environmental point of no return. World leaders are assembled discussing how to tackle climate change, and a teenage activist has called them out for not doing enough to address this pressing issue. And the President of the United States is... writing sarcastic tweets. On Monday, President Donald Trump tweeted about 16-year-old Greta Thunberg and Twitter promptly pointed out that the POTUS appeared to be mocking the teen activist after she delivered an impassioned speech at the 2019 United Nations Climate Action Summit in New York City.

On Sept. 23, Thunberg gave a powerful speech about the impact that climate change and its myriad implications will have on the youth of today and generations to come. She went on to explain that she "should be back in school, on the other side of the ocean," but she and other young people have had no choice but to take up the environmentalism because the adults and world leaders are failing them. "Right here, right now is where we draw the line," she said. "The world is waking up. And change is coming, whether you like it or not.”

Trump, in turn, retweeted a section of her speech that was highlighted by WIRED. In it, Thunberg said, “People are suffering, people are dying, entire ecosystems are collapsing. We are in the beginning of a mass extinction, and all you can talk about is money and fairy tales of eternal economic growth."

In response? Trump penned a sarcastic tweet. "She seems like a very happy young girl looking forward to a bright and wonderful future. So nice to see!" Trump said on Twitter shortly after 11:30 p.m. on Monday.

Trump's tweet about Thunberg came shortly after a video of her very obviously glaring at the POTUS as he walked by went viral. Her stink eye prompted a flurry of tweets. "Greta Thunberg’s glare at Donald Trump is giving me the energy to get through this Monday," BuzzFeed reporter Sam Stryker wrote. "Glaring with ya sister," another user wrote. "Thank you for appearing exactly when we needed to be inspired. You are making us proud, giving us goose bump and tears, but mostly you are giving us #Hope #Change #Courage."

Twitter also backed Thunberg up following Trump's tweet, pointing out that he was, quite literally, bullying a child. Several people tweeted that Melania Trump's "Be Best" anti-bullying campaign is in stark opposition to her husband's tweets. "Hey, @FLOTUS, is this what you meant when you said #BeBest? Your husband is mocking a 16-year-old girl w/autism. If people mock Barron, we on the left are the first to condemn them. Why are you silent in this?" one person wrote.

"The President of the United States spends the day in the same place as a 16 year old girl who criticize his policies, does not speak to her, then tweets insults at her from his safe space," said another. "What a pathetic, ignominious troll for a president."

And, unsurprisingly, the teen activist handled this situation like the boss that she is. On Tuesday, Thunberg indirectly responded to Trump's tweet by changing her Twitter bio to reflect his sarcastic description of her, as NBC News reported. "A very happy young girl looking forward to a bright and wonderful future," her bio now reads — updated from her previous description of "16 year old climate activist with Asperger's. Join the global climate strikes on Sept 20-27th! #FridaysForFuture."

Trump — famous for his denial of climate change — was not expected to appear at the UN Summit, but made a last minute appearance on Monday only to leave after about 15 minutes, according to USA Today. His visit was an impromptu stop en route to a priority event on religious freedom and the U.S. did not speak at the summit. Trump left after listening to speeches from from Indian Prime Minister Narendra Modi and Germany's Angela Merkel, according to CNN. The general attitude towards Trump at the gathering was less than positive, with many of the world leaders unhappy about his efforts to pull the U.S. out of the 2016 Paris climate agreement.

Thunberg is, unfortunately, no stranger to criticism. In fact, she wrote a lengthy response to the adults who have attacked her for everything from being backed and paid by parties having her do their political bidding, to a Fox News pundit calling Thunberg — who has been diagnosed with Aspergers — a "mentally ill child." Fox News has since apologized to Thunberg for the comments, but much unapologetic criticism remains.

She responded to these and more negative comments in a lengthy and powerful Facebook post about her backstory and her motivations written back in February. To those, like Trump, who see her as a "just a kid," Thunberg said she agrees that she and her peers shouldn't have to do this work. "I am just a messenger, and yet I get all this hate," she wrote. "I am not saying anything new, I am just saying what scientists have repeatedly said for decades. And I agree with you, I’m too young to do this. We children shouldn’t have to do this. But since almost no one is doing anything, and our very future is at risk, we feel like we have to continue."

No matter who attacks her for speaking out against environmental inaction, I have no doubt that Thunberg will continue to spread the word of science and call out those who fail to do the same.