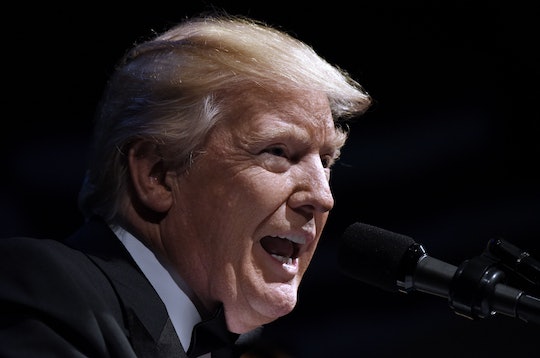 What Trump Doesn't Get About The "Gun Debate" & The U.K.

Early Monday morning, police in Florida reported that there had been "multiple fatalities" in a shooting in the city of Orlando, according to the BBC. The shooting is just a week before the first anniversary of the Pulse nightclub shooting there, and it has people on edge. One person who has not yet commented on the event is President Donald Trump. Recently, he tweeted about the London terror attack, and noted that "we are not having a gun debate right now," because the attackers didn't use guns. Trump's tweet about the "gun debate" came on the eve of the shooting in Orlando, which is extremely bad timing, to say the least.

The BBC reported that the shooting in Florida has been "stabilized," and that the shooting is not ongoing. But with the one-year anniversary of the Pulse nightclub shooting — the deadliest mass shooting in U.S. history and one in which 49 people in an LGBTQ night club died — coming up very soon, the incident raised alarm in Orlando and around the country.

The fact that Trump tweeted so recently about there not being a "gun debate" is awkward and insensitive considering the shooting in Orlando happened and received coverage so soon after, and because the need for a real "gun debate" is still very necessary in this country.

Trump's tweet on Sunday morning read in full, "Do you notice we are not having a gun debate right now? That's because they used knives and a truck!" But one terrorist incident that didn't involve guns in another country does not mean that we shouldn't be having a debate about gun safety in this one. The workplace shooting in Florida is just one of many gun violence incidents that happen in this country every day.

There are more than 33,000 gun deaths in America every year. There is definitely evidence that we need to be talking about gun safety, regardless of what weapons terrorists choose to use in attacks on another continent. (Additionally, Trump didn't think about this, but Britain has much stricter gun laws than the U.S. More on that below.)

According to CNN, other politicians took issue with Trump's tone-deaf tweet, including former Rep. Gabrielle Giffords, who survived a gunshot wound to the head in 2011. Giffords has since become a leading advocate for gun violence prevention legislation, and doesn't take the "gun debate" lightly, for obvious reasons.

But just to humor the president, let's take a look at recorded deaths as a result of gun violence versus knives versus someone being run over by a truck.

The Federal Bureau of Investigation's Uniform Crime Reporting Program listed Murder Victims by Weapon, 2009–2013, on its website. It reported that in 2013, there were 8,454 total known firearm deaths just in murder cases in particular. That doesn't count every other form of gun violence, which, as previously stated, includes thousands more victims.

By comparison, the bureau's information reported that there were 1,490 known murder victims as a result of "knives or cutting instruments" in the United States in 2013.

Let's broaden the scope a little. What about general motor vehicle deaths? Not even known motor vehicle murders, specifically. According to the Violence Policy Center, "the most recent analysis shows that in 2014, gun deaths outpaced motor vehicle deaths in 21 states and the District of Columbia." In recent years, the numbers have actually become more comparable.

President Donald Trump clearly made a bad comparison in his tweet on Sunday, and it's one that people who are knowledgable about the "gun debate" in the United Kingdom find utterly ridiculous. According to The Atlantic, British law has stringent gun restrictions. That publication reported that those seeking to own a gun have to apply for permission, and explain their reasoning for wanting a firearm. They have to produce references "to their mental stability and good character." They also have to prove that their weapons will be stored safely.

So yes, the terrorists in London used knives and a truck to kill people. That is awful and not something to use for political gain in a tweet. But imagine if they had also had guns. Looking at the numbers on gun deaths in a country that doesn't regulate them as strictly, like the U.S., and it's not hard to imagine that the outcome could have been much worse had guns also entered into the equation.

The United Kingdom has dealt with its "gun debate" already. Isn't it time the United States does the same?