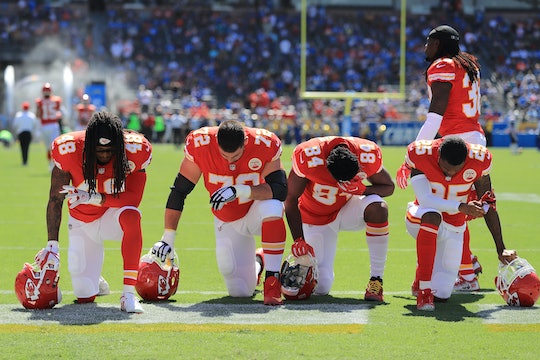 There's no question that it's a tough time to be an American right now. Politically, the country is majorly divided over the controversial policies and often outrageous leadership style of President Donald Trump, and each day tensions only seem to grow: will millions of Americans lose their health insurance? What will happen with North Korea? What about election fraud? The travel ban? The Mexican wall? The white supremacist rallies? It's enough to make your head spin, but Trump recently added another issue into the mix when he spoke out against athletes protesting during games. Trump's tweets about NFL players kneeling during the national anthem show that, beyond simply appearing to be another way to fire up his supporters and distract the world from other pressing issues, the president doesn't really even seem to understand why these protests are even happening.

At an Alabama rally in support of Sen. Luther Strange Friday, Trump gave a speech in which he called out San Francisco 49ers quarterback Colin Kaepernick for choosing to kneel or sit during the national anthem in an act of protest, according to TIME. The POTUS told the crowd,

Unsurprisingly, Trump's words led to a huge firestorm of comments, tweets, and opinions on both sides, with Trump supporters rallying around the POTUS in what they viewed as a strong message of patriotism and respect for the American flag, while others — including many high-profile athletes and politicians — condemned the president's comment as inappropriate, offensive, and completely dismissive to the very real issue of racial inequality in the United States.

The kneeling protests during NFL games are nothing new, but Trump brought them back into the spotlight with his comments, and on Sunday, many teams responded in solidarity with Kaepernick, and all the others who have joined him in peaceful protest. According to BBC News, both the Seattle Seahawks and the Tennessee Titans skipped the national anthem at their game on Sunday, for example, while the singer of the anthem took a knee at the end of the performance. Countless other athletes opted to sit or kneel during the anthem, and all but one member of the Pittsburgh Steelers did the same during their game in Chicago Sunday — Afghanistan veteran Alejandro Villanueva chose to stand for the anthem as usual.

On Twitter, the response was also strong. Seattle Seahaws cornerback Richard Sherman wrote the "the behavior of the President is unacceptable and needs to be addressed," while Green Bay Packers tight end Martellus Bennett wrote, "The idea of @realDonaldTrump thinking that suggesting firing me from football, confirms that he thinks that it's all I can do as a Black man.

But even though Trump received quite a lot of backlash from athletes and sports teams for his comments, it seems he may not have quite understood the extent of it. On Sunday, Trump tweeted, "Great solidarity for our National Anthem and for our Country. Standing with locked arms is good, kneeling is not acceptable." The only problem? The athletes locking arms were actually doing it in opposition to Trump, not in support of him.

According to People, more than 100 NFL players opted to show their support for Kaepernick and their condemnation of Trump's comments. And many teams, including members of the New York Jets, the Miaimi Dophins, and the Detroit Lions, chose to do it by locking arms.

But more than the confusion over the linked arms, it seems that Trump may have also missed the entire point behind the protest to begin with. On Monday, Trump claimed that the reason Americans should be outraged by the athletes' protest is because it's unpatriotic, and disrespectful to the flag, the country, and its veterans. And in a follow-up tweet, he dismissed the idea that it might have anything to do with race:

But, of course, the reality is that the protest has always been about race — players began taking a knee to peacefully protest against racial inequality in America, and the police deaths of innocent black men:

And the irony is that while Trump and his supporters are so ardently defending patriotism, they're ignoring the fact that the right to peaceful assembly is at the heart of the country's constitution. Yet while the president was able to remember the importance of free speech and protest when it came to the rights of the violent protesters in Charlottesville, when it comes to athletes quietly kneeling during the anthem to send a powerful message about racism in America, he doesn't hesitate to call them disrespectful, ungrateful, and out of line.

Ultimately though, it's not even particularly surprising that Trump has taken aim at the #takeaknee protests. It's one way he's sure to get a huge reaction (potentially deflecting from other issues, like the Graham-Cassidy vote), while reinforcing his image among his supporters as a totally pro-American, "I'm in your corner," "not afraid to tell it like it is" kind of guy. But by doing that, he's also telling the rest of the country — especially black people and other people of color — that they don't matter. And that is unacceptable behavior from a man who once vowed to bring the nation together in the name of progress.