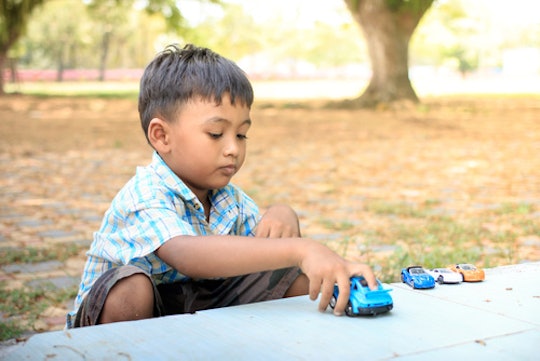 Why You Shouldn't Be Raising "Male Feminists"

When I found out I was pregnant with a little boy, I initially thought I would raise him as a male feminist. I wanted to raise someone who believed in equality between the sexes, who grew up playing with dollhouses and watching AbFab, who found strength in his own sensitivity, who treated his future partners kindly and offered to make feta-and-spinach omelets for them after sex.

On Thurs., June 1, the New York Times published a piece by writer Claire Cairn Miller on how to raise a feminist son, which was apparently targeted directly at young, left-leaning mothers like me. With its charmingly scrawled illustrations and quotes from such mainstream feminist thought leaders as Anne-Marie Slaughter, the piece was tailor-made to be shared among the Times' predominantly liberal, upper middle-class readers — and shared it was on social media, with "How to raise a feminist son" trending on Twitter Friday morning.

The piece was also promptly excoriated by right-wing trolls, none of whom seemed to have actually read the article, which is filled with such anodyne nuggets as "let him be himself" and "teach him to take care of others," wisdom that would be just as likely to appear on an episode of Caillou as a Marxist feminist zine. Yet while their Pavlovian response to seeing the word "feminist" in a headline was predictable, the article does raise important questions about whether parents have the obligation to instill positive social justice values in their children, or whether we should be raising our sons as male feminists to begin with.

As the mother of a now-4-and-a-half-month-old who is about as rabid a left-wing feminist as one can get, I have been mulling over these questions quite a bit. The answer to the first one is obviously "yes." But the answer to the second is more complicated, and frankly, far more nuanced than a shareable Times op-ed might suggest. I no longer want to raise my son as a feminist, because I'm not sure that being a true male feminist is even possible. In fact, in my heart of hearts, I'm not sure what male feminism — or even feminism itself — means anymore.

In the New York Times op-ed, there is a strong implication that instilling your children with positive liberal social values means that they will necessarily take, that raising a feminist child is like assembling a dresser from IKEA. If you follow the instructions — teach your son it's OK to cry, because that dissembles toxic masculinity; force him to do traditional "pink" household chores like cooking and cleaning, so he doesn't believe negative gender stereotypes — you will end up with a strong and sturdy Mälm chest.

But aside from the fact that parenting comes with no guarantees of what kind of child you'll have, there is strong evidence that our society is so steeped in toxic masculinity, so drenched in the primordial ooze of white male supremacy, that it doesn't matter how many dolls you buy your kid or how many times he reads A Is For Activist. A white man born to uber-woke, uber feminist parents is still a white man, and he will enjoy the privileges afforded to white men. And with this privilege comes the inherently limited ability to empathize or identify with the lived experiences of women, LGBT people, and people of color.

A white man born to uber-woke, uber feminist parents is still a white man, and he will enjoy the privileges afforded to white men.

On a more personal level, time and time and time again, I have seen gentle, kind, and intelligent men — men who are liberal, men who are Good with a capital G, men who are my friends and former partners — crumble to dust in response to the slightest pressure on their feminist credentials: if a woman sexually rejects them, for instance, or if they hear about a sexual assault victim who got drunk and dressed provocatively and happened to be in the wrong place at the wrong time with the wrong person. And truth be told, it takes very little to knock down the façade of male feminism. All it takes is questioning their power as white males; or, alternatively, asserting your own.

I am married to a man who is, in most respects, as feminist as they come; he helps shoulder the burden of childcare, he believes strongly in women's reproductive rights, and he grew up playing with his mother's jewelry and watching Absolutely Fabulous. The other night, we were talking about the controversy over an all-female Wonder Woman screening and he said he understood why men were so upset about it. "Everyone should be welcome everywhere, regardless of gender," he told me.

It never occurred to him that women had been excluded from all-male spaces for centuries, or that they might want to spend two and a half hours in a safe space, free of the male gaze, celebrating their strength with other women. That didn't make him a bad person; it just meant his perspective had been limited by his own lived experience, and he has never had occasion to consider these questions.

Feminism is the strong brew that has been diluted to the point of total blandness, at a time when we need its potency more than ever. But that hasn't stopped parents from patting themselves on the back for drinking from the cup.

We are living in a time when feminism itself, let alone male feminism, has been coopted and reshaped by so many individuals at so many different times for so many different ends that it has nearly lost its meaning; when CEOs like Sophia Amoruso can brand themselves as advocates for female empowerment and allegedly fire employees who have the gall to get pregnant; or when Ivanka Trump can stand up for gender equality and get paid to openly praise countries where women are not allowed to drive. Feminism is the strong brew that has been diluted to the point of total blandness, at a time when we need its potency more than ever. But that hasn't stopped people from patting themselves on the back for drinking from the cup, and parents who raise their sons as feminists — not to mention the now-adult millennial men who proudly self-identify as feminist — are no exception.

I still want my son Sol to believe in equality between the sexes. I still want him to play with dollhouses and watching AbFab and make post-coital omelets for his future sex partners. But I don't think I need to raise him as a capital M capital F Male Feminist to do it. In fact, I never want him to use that label, for fear he will grow complacent about his sense of progressivism and use his feminist credentials as a weapon instead of a badge, as so many men have.

For that reason and that reason alone, the New York Times published the right answers to the wrong question. We shouldn't be asking how to raise a male feminist. We should be asking how to dismantle a culture that continues to reward men simply for being men, a culture that makes it difficult, if not impossible, for men to be feminists to begin with.