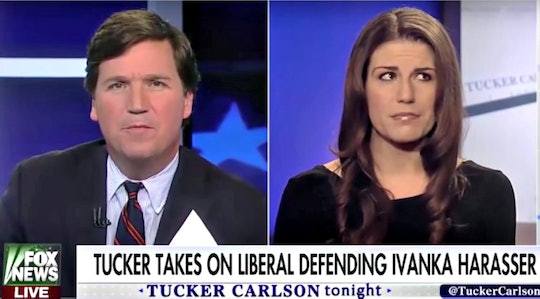 If things are feeling a little too merry and bright for you this holiday season, feel free to grab a fresh glass of egg nog and watch Fox News' Tucker Carlson respond to Teen Vogue's Lauren Duca over her tweets about Ivanka Trump. It's a ridiculously sexist conversation, with Carlson talking over Duca, pretending not to understand what he calls her "moronic" views, and closes with Carlson telling the writer to "stick" to covering Ariana Grande and her thigh-high boots instead of dissecting political issues.

Duca does her best to have a reasoned, nuanced conversation about her work before finally being forced to remind him that a woman can write about celebrities and also have views on politics. Because well, they can.

Duca recently wrote an article about the President-elect "gaslighting" American voters, breaking down how she believes his campaign was full of contradictions and often not based in fact, but political ideology. When Ivanka Trump was harassed on a Jet Blue flight, Duca tweeted, "Ivanka Trump is poised to become the most powerful woman in the world. Don't let her off the hook because she looks like she smells good." Tucker took issue with all of Duca's views on the Trump campaign and Ivanka's possible role in his administration.

Carlson didn't just try to mansplain to Duca. Instead, it was a textbook case of straight up misogny. Here's why.

He Pretends Not To Understand Her

This is cable news so it's not too surprising that the conversation devolved into Carlson just talking over his guest. But there are times when Carlson seems to think that Duca is speaking a different language. From the beginning of the interview, Duca explained that she didn't condone anyone yelling on a plane, but that Ivanka Trump shouldn't be immune to criticism. It's a pretty simple argument.

But Carlson insists that Duca thought the man who criticized Ivanka was right to do so, which is not what Duca was saying, at all. In fact, she repeatedly made clear that she simply thought people have a right to criticize those in power.

Later, Carlson referenced her article on Donald Trump and said, “Teen Vogue, which I guess you write for." Duca reminded him that that was a pretty patronizing thing to say, since she obviously wrote the article and works for the magazine. Undeterred, Carlson then took issue with Duca's wording that Trump threatens the "sovereignty" of Muslims to practice their religion in the country.

"What does that even mean," he asked, completely confounded. Duca tries to explain that his platform of banning of Muslims (which is still on his website, she explains) is a threat to religious freedom. Still, Carlson appeared to not understand simple English and continued to cut Duca off as she attempted to have a reasonable conversation.

He Pits Women Against Each Other

Duca's point about Ivanka Trump is a complex one, but Carlson told her that she was "objectifying" the president-elect's daughter by talking about how she "looks like she smells good" and for tweeting that Ivanka had a "sinister complicity" in promoting an anti-women platform for her father. Duca repeated over and over again that there are many admirable things about Ivanka, but that there are valid criticism to make of a woman who supported one of the most "anti-women candidate" the country had seen in decades. "It's her dad" Carlson told Duca.

Which is exactly Duca's point — as a close confidant, on a personal and professional level, Ivanka had the privilege of speaking to her father's messy track record with women's issues for female voters, which she did not do."I disagree with [Ivanka] providing a surrogacy for her father based on an empowerment of women when there's an inherent disconnect between his campaign and her beliefs," Duca told Carlson.

Instead, Carlson chose to tell Duca that she was calling Ivanka "evil," thereby one woman against another instead of acknowledging that two females can disagree on the issues.

Overall, Carlson just assumes that Duca isn't qualified to have an opinion (even though he invited her on the show to defend one, which defies logic). In addition to wondering if Duca even writes for Teen Vogue early on, Carlson attempted to discredit Duca because of the other topics she covers at the magazine, like celebrity news and fashion.

Carlson ended the interview telling Duca to stick to writing about thigh-high boots instead of politics. When Duca calls out the sexism in that remark, Carlson abruptly ended the interview. The overall assumption is that because Duca also spends time breaking down Rob Kardashian and Blac Chyna's relationship, it's impossible for her to write about politics.

This just in, everyone: just like men can have a wide array of interests and have serious political views, women can, too. But Carlson either believes that women are only interested in celeb news and fashion or that it's not possible to have opinion on Kylie Jenner's lip kit as well as what happens to reproductive rights.

Both beliefs are sexist.

After the interview, Duca tweeted that Carlson, "is an enemy of rational discourse. In this fraught moment, his bully tactics are profoundly damaging, and achieve nothing." Given that this was an interview on cable news, the bullying tactics aren't that surprising. But the depth of the misogynistic hole Carlson dug for himself most definitely is.

It's important to be able to talk about the issues at stake in a Trump presidency and many of them concern women's rights directly. But when news anchors like Carlson simply assume that women don't know what they're talking about because they're, well, women, the problem is much bigger than whether someone should be able to yell at a public figure on an airplane.