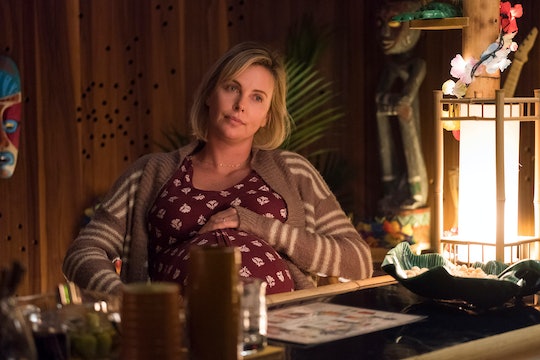 The first thing you see is a pregnant belly. I am watching Tully, the new movie by screenwriter Diablo Cody and director Jason Reitman, and a film for which Charlize Theron gained 35 pounds — a detail so fixated on that it has proven how superficially we tend to examine the postpartum period. For Marlo (Charlize Theron), the belly is a symptom, but not the cause, of her difficulties. She is a mother of two who is about to turn her somewhat manageable life upside down with the arrival of a third. Milk is spilled, bellies are aired, (babies are cuddled), and screams are had. Tully star Charlize Theron, 42, talked about motherhood with Romper, and about taking on one of the most stigmatized, hidden, sublime and hysterical periods in life: postpartum. "We were telling your story," she says of the mothers who will find their way to the film.

As Tully kicks into gear, Marlo is at a dinner with her "rich dick" of a brother (Mark Duplass), and the offer of a night nanny is floated, which Marlo — snappy even in her lowest moments — initially waves off as an idea out of "feudalist China." In the U.S., we know, new mothers fend for themselves. Sleepless nights are a given, and women simply figure out how to keep it together through the twilight zone of the "fourth trimester." A mother of two herself, Theron tells Romper by phone that depicting the isolation, exhaustion, and, yes, physique of early motherhood wasn't intimidating because "making this movie, I felt like I wasn't alone."

The arrival of a baby is like a bomb going off for Marlo, as it was for Tom Selleck and Ted Danson before her, and pushes her to override her fears about murderous babysitters and invite the night nanny, Tully (Mackenzie Davis), into her home.

Tully cares for baby Mia, as well as Marlo, with the verve of a pay-by-the-hour manic pixie dream girl, her care and attention working to reveal the lack of support for Marlo. Marlo's husband Drew (Ron Livingstone) works long hours, her 5-year-old son Jonah (Asher Miles Fallica) has some kind of unnamed neurological condition, and her 7-year-old daughter Sarah (Lia Frankland) is self-sufficient but could do with more attention. Young, impulsive, and with a belly as flat as a spatula, Tully feels like everything Marlo is not. She knows how to latch a baby, how to calm a baby, how to bake adorable cupcakes, how to unpack Marlo's ambivalence, how to ~arouse~ a headphone-wearing gamer husband... and she does it all in the wee hours.

Even for her character Marlo, who is on her third child, the growing pains are evident. "With parenthood," Theron says, "these knuckleheads take up all all of your space, they become the priority," and for moms and dads alike, the question is, "are you ready to say goodbye to this selfish narcissist sense of yourself in order to make room for raising kids?"

The film is funny even in its hardest moments, and makes a conscious decision not to pathologize Marlo, who seems to carry the weight of her entire family on her frame. Director Jason Reitman says that Cody's decision not to use the word "postpartum" — or its constant companion "depression" — in the film gave it a wider application for mothers and for their partners.

On which note, the burgeoning friendship between Tully and Marlo almost allows you to forget that Marlo has a husband. Where is he?? this writer scribbled in her notes near the end. Where are all the dads?

"This is a really important moment for men to listen," Reitman says by phone, "the men need to listen and learn and ask questions."

There is the idea that when we become a parent your whole life just shifts into being a parent, and you don't have to do or think about anything.

To imbue the film with those little details that set off a crack of recognition (the slow drip of pumped milk from a flange, rocking a baby to sleep in the car seat, worrying about falling asleep nursing, relieving engorged boobs over a sink), the production team surveyed women on the crew and in a wider circle about their experiences. The forthrightness of responses struck Reitman. "They had not had a chance to talk about these things before and I could feel the urgency to talk and to be heard," he says.

"It's something we don't talk much about," agrees Theron, "because there is the idea that when we become a parent, your whole life just shifts into being a parent, and you don't have to do or think about anything."

In actuality, she says, all transitions, motherhood inclusive, spur questions like, "Am I in the right place now? Is this what I'm supposed to be doing? I thought I'd be doing something else."

It's real stuff and difficult stuff.

"In being a parent myself, a lot of the hardships and the stuff that you struggle with are actually very funny," says Theron, who is an adoptive mom to two children, Jackson, 6, and August, 2. "There is so much stuff that I've been talking about with my old kids that, if I'm truthful, when it happened I was crying about, and anxiety-driven about, and now I can reflect back and laugh about it."

In other words, there is still time to reconsider the way we view new mothers. People will say Theron's performance is brave, fearless — but then portraying motherhood is nowhere near as hard as living it. The good news is that babies learn to sleep through the night, and spilled milk is eventually funny.

"In many ways this movie, tonally, is so true to what life is," Theron says. "It's real stuff and difficult stuff, but there's a joy in watching it because you can see yourself in it."

CORRECTION: This article previously incorrectly identified the actress who portrays Sarah. It has been updated to reflect the correct actress.