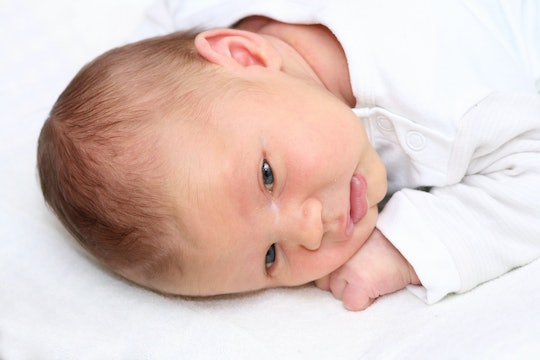 I Hated Tummy Time, So I Did This Instead

We all know how tummy time works: you put your baby down on a blanket in a supine position, and in theory, you let them grab at toys or chew a rattle or what the hell ever. In practice, however, tummy time is different. Mostly, you just watch as your baby wails and smushes his head on the ground until you feel horrible and finally pick them up.

All of my kids held up their heads early. They crawled on time. They walked on time. They are three totally functional human beings, and I'm pretty sure the fact that I wore them constantly has something to do with that.

This is not to say that tummy time isn't important. It is. According to the Mayo Clinic, tummy time strengthens babies' neck and shoulder muscles, improves motor skills, and also helps to prevent plagiocephaly, the condition that causes babies' heads to become flat. We didn't abandon the basic principles of tummy time — we just practiced them in a way that worked best for us.

Tummy time hasn't always been a required practice for parents. In 1994, the National Institute of Child Health and Development (NICHD), in partnership with a bunch of other agencies and organizations, announced what was then known as the Back to Sleep Campaign, which is now called Safe to Sleep. Its goal was to reduce Sudden Infant Death Syndrome (SIDS), and research showed that one of the biggest risk factors for SIDS was babies sleeping on their stomachs. The easiest way to reduce SIDS deaths was to put babies to sleep on their backs.

The NICHD says that since the start of the campaign, SIDS deaths have decreased by 50 percent. Except there was one problem: since babies under 1 year old were no longer sleeping on their backs, they were no longer practicing using their neck and trunk muscles, and were more prone to flat spots on their heads.

Since then, pediatricians have urged parents to put their babies on their tummies for a few minutes a day, a few times a day. Ergobaby notes that tummy time “helps infants learn to move their head up and from side to side," and being on their stomachs helps build up core, neck, and arm strength faster.

But if you frequently wear your baby, there's some evidence to suggest that it might serve the same purpose as regular tummy time. According to Ergobaby, if a baby is in an upright carrier, they are able to exercise the same neck and core muscles that get a workout during tummy time. In other cultures, babywearing advocates claim, there is no tummy time, but because mothers tend to wear their infants more often, they develop fine. Moreover, if the baby is in an optimal babywearing position — baby worn on the front, heart-to-heart, close enough to kiss, with his legs outside the carrier — they are also motivated to look around and engage with the world around them, which will also develop their head, neck, and upper spine strength.

Of course, if one of the benefits of babywearing is that it allows the baby to engage more fully with the outside world, that's assuming that the baby is awake in the carrier. My kids spent a heck of a lot of time asleep on me, and that probably didn't count as exercise. Sleeping babies are ragdoll-limp and floppy-headed; they slump. But in my experience, they also spent an awful lot of time awake and alert in the carrier, which helped them engage their neck muscles. Everyone marveled, in fact, at how early my oldest held up his head.

We didn't abandon our sons to the wolves by neglecting tummy time. We just did it in a way that worked for us.

It's important to note that while I don't think you need to wear 24/7 to skip tummy time, I also don't think wearing a baby for three minutes in a sling is enough to totally cut out tummy time. I wore my kids a heck of a lot, and I tried to use good sense. If my baby was awake and alert and happily gazing at me and his surroundings, I figured he was getting the exercise he needed. I might just wear him during a Target run, or take him for a walk around the block, or just clean for a while, which, while totally boring to me, was incredibly interesting to the baby. And as always, I followed baby’s cues. If he wanted to be down on the floor, I put him down. If he wanted to be stuck in a sling and cuddled, I stuck him in the sling.

We didn't abandon our sons to the wolves (or to our German Shepherds, in our case) by neglecting tummy time. Instead, we wrapped them up in Moby wraps or woven wraps on our chests and carried them wherever we went. We didn’t use stroller or carriers; instead, we wrapped our sons. All my kids had perfect round little cue ball heads, all without a minute of tummy time. That's not to say that babywearing is right for every parent, or that parents should stop putting their kids on their tummies; I can only tell you what worked for us, and I can assure you that even though we never did tummy time, my 7-year-old walks just fine.