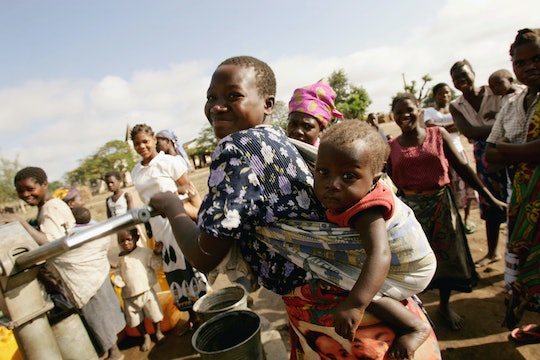 Turns Out, History Has Been Underestimating Working Moms Since Prehistoric Times

For some reason, the world just kind of assumes that women have been chained to the kitchen stove or baby's bedside for all of time. But, as it turns out, history has been underestimating working moms since prehistoric times. Although, are any of us really all that surprised?

According to new findings from the American Association for the Advancement of Science, women from ancient history actually worked a lot harder than previously assumed, as NPR reported. The published study — entitled: "Prehistoric women’s manual labor exceeded that of athletes through the first 5500 years of farming in Central Europe" — basically proves exactly what the title says it does.

Based on the skeletal remains of ancient females, the archaeologists discovered that women were both mothers, and performed some pretty hardcore manual labor, dating "from the early days of farming about 7,500 years ago up until about 2,000 years ago," according to NPR.

Now, as confusing as all that sounds, here's the gist: even thousands of years ago, women were pulling more than their fair share of the workload, with the bones of the ancient females showing that their upper body strength was actually greater than the average woman of today. Yeah, that's right, patriarchy: women have basically always been great at multitasking and working hard.

What's more, not only does this study prove yet again that women are awesome, but it's also the first of it's kind. In the past, "men have traditionally been the focus of medical books," NPR reported. Which means that until now, no one really thought to compare how women worked in ancient times, or if they even did. But, now, researchers know that women have been working and mothering at the same time for thousands of years.

According to NPR, the archaeologists, led by Alison Macintosh, looked at a very specific set of data and information from ancient women, and women of today:

She and her team analyzed the strength of 89 shinbones and 78 upper arm bones from women who lived in Europe about 7,500 years ago up until the Medieval age. Then they compared those bones to those of young women in Cambridge, U.K., today, including rowers and runners.

And their results actually weren't too shocking. Women back in the day worked really hard, just like they do today. Well, they might have actually worked a little bit harder. As NPR reported, "On average, their humerus bones — the upper arm bone — were about 16 percent stronger than elite rowers today, who work their arms intensely for 18 to 20 hours each week."

To summarize, the archaeologists believe that based on the prehistoric women's bone strength, they actually did a lot of manual labor and farming. According to biological anthropologist Brigitte Holt, who spoke to NPR about these findings, women were "hoeing, planting, harvesting, chopping wood, grinding grain and getting water — and all this while raising small children."

Which, again, isn't that surprising. An October study in Sex Roles looked closely at how men and women behave after the birth of their child, and found that women tend to do more — even if they're working. The study looked at 52 couples who each earned about the same amount of money and how much free time they spent on their days off. According to MSN's report of that study:

In short, 7,000 or so years ago women were working hard while raising children, and they're doing the same thing now. Granted, women's jobs today tend to be more varied than in ancient times, but still. The fact remains that moms are unstoppable and are masters of many, many crafts — and they always have been.