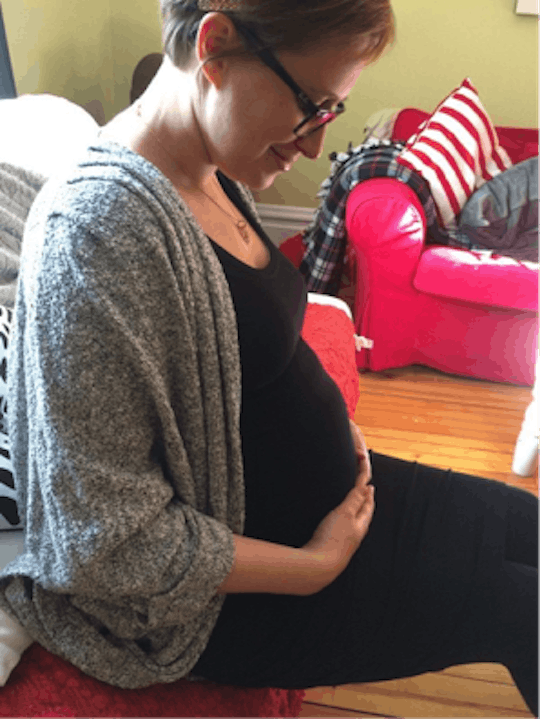 Turns Out, My Amniocentesis Wasn't As Scary As I Thought It'd Be

It is midnight. I am 32 weeks pregnant, crouched on my bathroom floor, throwing up into the toilet. This has been a familiar scene for most of my pregnancy, as I've suffered from terrible morning sickness — the kind of morning sickness that happens not just in the morning but all the time. But this time, I'm not throwing up because of my pregnancy hormones. I'm throwing up because tomorrow, I have to go to the hospital and let a doctor stab my pregnant belly with a needle and extract amniotic fluid from my womb. I am throwing up because I am terrified that any number of things will go wrong: that they will somehow stab my baby (probably in her little unborn eyeball), or, more seriously, that the amniocentesis could trigger premature labor. But surprisingly, when I had my amnio because of my daughter's birth defects, it wasn't as scary as I thought it would be.

Immediately after receiving our daughter's diagnosis of complete agenesis of the corpus callosum, we were shuttled from appointment to appointment with neurologists, geneticists, and NICU doctors to discuss the hows, the whys, and the what nexts. From the day of the diagnosis on, I had to pull myself and my husband from work twice a month to have Level 2 ultrasounds so our doctors could monitor her ventriculomegaly — a condition where the lateral ventricles in her brain, that deliver fluid to the spine, were dilated to double their size, putting them at risk for bursting. The ultrasounds were an inconvenience and mildly stressful but not painful. Plus, I got to see more images of my baby than the average mom, which was nice. I underwent numerous blood tests to rule out various infections that could have caused her abnormalities. As a person who has always been nauseated by the sight of needles and has passed out at the sight of her own blood before, those were unpleasant, but over quickly.

One of the doctors, the one not performing the procedure, explained what would happen and asked, "Do you have any questions?" And I did. I had one very important question. I wanted very much to know: Will it hurt?

I'd received an MRI a few weeks prior to her official diagnosis, a procedure that, while uncomfortable, was not too scary. It helped that the only MRI machine in our city was located at the children's hospital and so a plethora of distraction techniques were at the doctors' fingertips to make the idea of lying down in a small metal tube while a loud machine whirs around you and takes pictures of your insides a bit more palatable for kids. I was allowed to watch episodes of Friends from a pair of glasses that reminded me of a View Master. The only parts that really sucked was the fact that I had to lie on my back the whole time — an uncomfortable position for a pregnant woman in her third trimester — and I had to hold my breath for many long moments, which convinced me I was depriving oxygen to my, already potentially fragile, baby.

But when our baby's geneticist asked me if I'd be willing to get an amniocentesis, I got nervous. I said, yes, of course; an amnio would rule out a genetic disorder or chromosomal abnormality as the potential cause of my daughter's brain disorders, and understanding the origin of her disorders would help doctors in their treatment. But that didn't mean I was at all excited about having my baby belly stuck with yet another a gigantic needle.

The morning after my midnight mouth-crying, when I checked in for my appointment, the nurse gave me a funny look, checking my file again and again. Most amnios are done in the early stages of the second trimester — between 15 to 20 weeks pregnant — but my third trimester was already well underway. Her scrutiny added extra stress to an already stressful situation. They called us into the ultrasound room, and I laid down on the bed and pulled up my maternity shirt to expose my belly. Two doctors came in, introducing themselves, preparing tools, looking at images of my sweet baby girl on an ultrasound screen, deciding the best place to — essentially — stick me. One of the doctors, the one not performing the procedure, explained what would happen and asked, "Do you have any questions?" And I did. I had one very important question. I wanted very much to know: Will it hurt? He looked at me, smiled not unkindly, shrugged and said, "Well, it is a needle." His frankness and his (arguably) flippant attitude, might have turned some people off or made someone else mad, or feel even more scared, or silly, or dumb. But for whatever reason, his direct and plain-spoken honesty was exactly what I needed to hear. He made me smile, laugh at myself, and in the end, relax — even just a little bit.

Did it hurt? Well, it was a needle. Was there a scary moment where they pressed the needle into my belly and the baby moved, and I saw my fears of her tiny eyeball being stabbed come to life? Yes, of course there was, but then my doctors simply repositioned the needle and were able to complete the procedure without incident. Her eyeballs were safe. Once it was all said and done, the actual procedure lasted about 30 seconds and then it was over. After, I went home, my belly a little sore, I got to sit on my pull out couch all day on bed rest. My friends, who'd come over to keep me company, brought me food and made me laugh and reminded me, much like that practical doctor, that things were scary but everything was going to OK.

I can say now, with confidence, that I wasn't scared of the amnio. I wasn't even that scared of the needle. I was scared of what it represented: the fact that my baby was diagnosed with a potentially debilitating set of disorders, what the results would be, the unknown.

A few days after my amnio, I noticed some wetness in my underwear. I'd been told to be on the lookout for leaking amniotic fluid and I immediately called the Maternal Health Unit informing them that I believed I might be at risk for infection. They advised me to come in right away. Again, I felt nervous and scared. I waited in the waiting room and then in an exam room for what felt like hours, but was really only about 30 minutes. A doctor did a quick exam and took a sample, promising to come back with the results right away. And she did. And it wasn't amniotic fluid. It was pee.

An amniocentesis is an invasive procedure that carries a risk for miscarriage, leaking amniotic fluid, needle injury, or infection, according to the Mayo Clinic. It's a procedure that should be taken seriously, and it's something I do take seriously, regardless of all my jokes about poked baby eyeballs. But I think I can say now, with confidence, that I wasn't scared of the amnio. I wasn't even that scared of the needle. I was scared of what it represented: the fact that my baby was diagnosed with a potentially debilitating set of disorders, what the results would be, the unknown.

I'm not sure if I'd feel differently about my experience if the test results hadn't come back negative for any and all genetic and chromosomal abnormalities. I don't know if my memory of the experience has been clouded by that good news, and then the safe and healthy delivery of my daughter, and then a year-and-half of her "normal" and neuro-typical development. But for me, for now, my amnio experience was kind of a perfect metaphor for most of life's experiences: A big build up fraught with fear and worry, some practical and sage advice that roughly translates to "calm down," love and laughter with the people who mean the most to you, and then, peeing yourself a little bit, just to keep you humble.