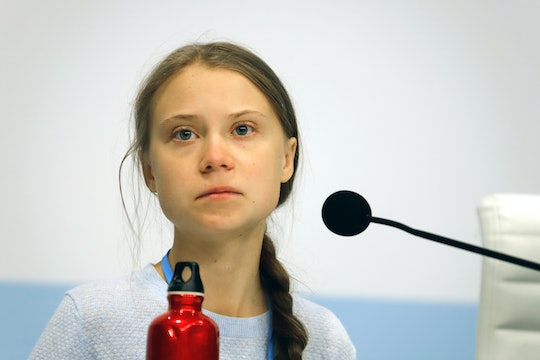 If you thought 16-year-old Greta Thunberg would return to Sweden following her intense environmental campaign, then you thought wrong. As it turns out, a TV show about Thunberg's climate change activism is coming to the BBC and it sounds seriously compelling.

The teenage activist — who was named Time's 2019 Person of the Year and has been nominated for the Nobel Peace Prize — made waves in the U.S. and around the world over the past year. And it all started in August 2018 with her skipping school to protest outside of the Swedish Parliament. Since then, she has addressed heads of state at the UN, handled attacks on Twitter from President Trump like a boss, met the Pope, and inspired millions of people across the globe to care about climate change.

It comes as little surprise, then, that Thunberg will be the subject of a new BBC Studios series from its award-winning Science Unit. The series will follow her crusade, "which takes her to the front line of climate change in some of the most extraordinary places on earth, as she explores what actions could be taken to limit climate change and the damage it causes," according to a news release from BBC.

Along with following Thunberg's activism, the series will feature experts who explain why the global temperature rise needs to remain below 1.5 degrees. Viewers can expect to see the Swedish teen meeting with political leaders and business big wigs alike as she challenges them to enact change.

"Climate change is probably the most important issue of our lives so it feels timely to make an authoritative series that explores the facts and science behind this complex subject," Rob Liddell, BBC Studios executive producer, said in a statement. "To be able to do this with Greta is an extraordinary privilege, getting an inside view on what it's like being a global icon and one of the most famous faces on the planet."

Although there was no information about when viewers should expect the new series featuring Thunberg — or what it will even be called — I have a feeling the show will draw a ton of attention when it eventually airs. Hopefully, you know, the right people tune in. Because we need all the help we can get in order to take meaningful action against climate change.