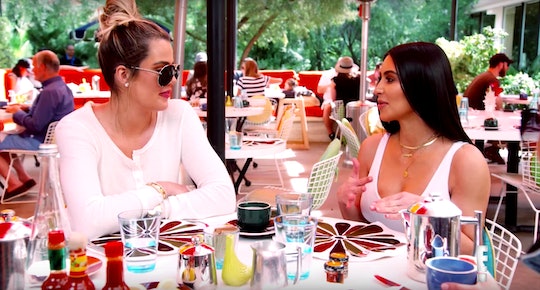 Yikes. Watching Shows Like 'KUWTK' May Make You "Less Sympathetic" To Those In Need, Study Says

If you watch reality shows about rich people or read magazines touting $20,000 outfits on the reg, you may want to scale back a bit. According to a new study, these media habits might make you "less sympathetic to the poor." Yikes. But don't fear — not everyone is affected by their glamorous media consumption in the same way.

The London School of Economics and Political Science's Department of Media and Communications conducted the study to see if consuming this type of media makes people more likely to "be in favor of punitive cuts to welfare payments." For the study, which was published on the school's website, 487 British participants, between the ages of 18 to 49, were surveyed about their television and magazine and newspaper habits. Specifically, participants were asked how often they read tabloid newspapers that often write about celebs, and magazines including Vogue, Cosmopolitan, GQ and Esquire, which all feature a lot of expensive items.

Additionally, they were asked how often they watched nine television shows, including Keeping Up With the Kardashians as well as The Apprentice, X-Factor, and Made in Chelsea. People who watched these shows, according to the study, were found to be more likely to have “stronger materialistic and anti-welfare attitudes than lighter consumers of these shows.” Oof.

So, that's not to say you need to cancel your weekly appointments with Keeping Up With the Kardashians and your couch — just make sure you aren't letting their lives of luxury go to your head too much.

The study also surveyed participants about their feelings on topics including wealth, poverty, and U.K. government tax cuts after they viewed several different images for one minute. The control group was shown "neutral stimuli," including advertisements for London Underground and headlines about dinosaurs. In contrast, the treatment group was shown very different stimuli, including advertisements for luxury items and tabloid photos of celebrities toting expensive items. The study's researchers found that the one minute of viewing this media affected participants' views on welfare, as many participants from the treatment group were more supportive of anti-welfare ideologies.

Dr. Rodolfo Leyva, who worked on the study, believes society's increased consumption of materialistic media messages (MMMs) is making people more selfish and less sympathetic to those in poverty. He wrote in the study:

The Apprentice, Keeping Up With The Kardashians and X-Factor are replete with MMMs that are engineered to absorb audiences into the glamorous world of wealth and celebrities and thus have a strong potential to function as cultivators of materialistic values and attitudes ... Humans are inherently materialistic but also very social and communal. The way this is expressed depends on our culture. If there is more emphasis on materialism as a way to be happy, this makes us more inclined to be selfish and anti-social, and therefore unsympathetic to people less fortunate.

That being said, the Kardashian family's constant wealth-flaunting does not mean they are trying to make their fans favor rich people over impoverished people. In fact, the KarJenners have been known to use their fortune to help those in need. After last summer's Hurricane Harvey struck Texas, Kris, Kim, Khloé, Kourtney, Kendall, and Kylie all chipped in to make a $500,000 donation to The Red Cross and The Salvation Army, as TMZ reported at the time.

Additionally, when Kim Kardashian and Kanye West welcomed their first child, North, they asked for donations to the Lurie Children's Hospital in Chicago in lieu of gifts, as Us Weekly reported. Donations made in honor of North's birth went to the Neonatal Intensive Care Unit Fund, which will "help care for the most critically ill babies and their families," a rep for the hospital told TMZ in a statement.

Furthermore, in 2013, the whole KarJenner gang had a family yard sale for charity, as E! News reported. Based on the photos Kim posted to Instagram at the time, all proceeds from the yard sale were donated to No Kid Hungry and Greater Los Angeles Fisher House Foundation.

So next time you indulge in a Keeping Up With the Kardashians marathon, maybe supplement your commercial breaks with some nice boring ads for the London Underground.