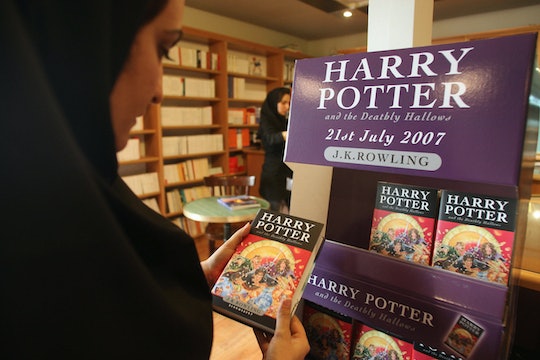 There are some things from your childhood will never never lose their sparkle and that is amazing. The Harry Potter series is one of those things. Today marks the 10 year anniversary of when the final scene in the final Harry Potter book, Harry Potter and the Deathly Hallows takes place. Spoiler alert (in case you haven't caught up over the past 10 years): in that scene, Harry Potter sends off his oldest child with wife Ginny, Albus Severus, to his first day of school to begin a new adventure. The tweets made today about Albus Severus Potter's first day at Hogwarts proves that the magic will never die.

But if you were one of the many who couldn't make it to King's Cross, people were celebrating on Twitter, commemorating the anniversary of the final scene and Albus Severus' first day in less than 142 characters. The tweets are equally as inspiring and heartwarming as you would imagine. People will never let Harry Potter go.

There are so many reasons why Harry Potter has stuck with adults to this day. This series was something that transported kids away from their childhood troubles to a magical world of escapism. But there is a scientific reasoning behind this, too. Research shows that people are drawn to emotional story arcs with peaks of happiness, despair, and adventure, like the Potter series, according to the Washington Post, which tends to form a more emotional connection with the reader.

One study conducted in 2011 also found over half of Harry Potter readers said that they did not read for fun before starting the series and 3/4 of the kids in the same study said it made them more interested in reading, according to Good Housekeeping. All of the Albus Severus tweets 10 years after the book premiered can be attributed to this reasoning.

Harry Potter inspired a new generation of readers and dreamers so many years ago that have vowed to keep the magic alive so many years since Harry himself (and his kid) went to school. On this day, all is well.