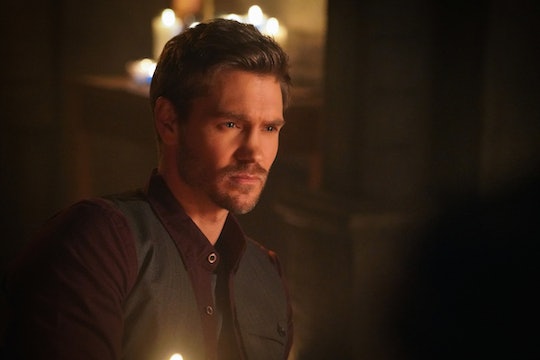 After months of anticipation, Riverdale fans finally got to meet Farm cult leader Edgar Everner. He’s been a sinister presence on the show all season, but after seeing the character in person, fans may be forming a different opinion of him. Just browse through tweets about Chad Michael Murray as Edgar Evernever on Riverdale and you’ll see that fans are totally digging his vibe.

Ever since Alice and Polly joined the Farm cult, they’ve been raving about Edgar and his prophetic ways. They’ve tried their hardest to get Betty to join, but she’s been consistently hip to the cult’s con. However, Betty didn't’ anticipate that Edgar would ask Alice to empty out her college fund and sell their home so he could buy a new homebase for the Farm in Riverdale. Because of all the mayhem he’s caused in Betty’s life, Edgar has been this season’s unseen villain...until now.

In the Mar. 20 episode, “Big Fun,” Edgar’s daughter, Evelyn takes charge of the school’s theater production of Heathers: The Musical with Kevin, the cult’s latest recruit. Betty finds out that Principal Weatherby is also part of the Farm, and with his approval, the cult was allowed to sponsor the event. When the students finally perform, their families are seen watching from the audience. But it isn’t until after the cast finishes their final number that Edgar is seen in the audience. He stands up alone with a sinister slow clap, and then the rest of the Farm members in the audience — all dressed in white — stand up and slow clap with him in unison.

People were elated that they finally got see Edgar in person, but his slow clap — which was by far the coolest and weirdest moment of the season — became the topic of many fan tweets:

In a recent interview with Cosmopolitan, Murray revealed how Edgar’s infamous clap came to be. “I've always wanted to do that particular clap,” he told the outlet with a laugh. “I think you see his power in a very simple moment. When you show power, instead of just explain power, it's much more powerful — You see what Edgar appreciates about the performance, and then you see the Farm join him. You see the power he has over everybody and that he's taking Riverdale by storm.”

Murray didn’t divulge any details on what Edgar is upto, but he did tell Cosmopolitan that the Farm cult leader would be taking fans on a wild ride. He described his character as a calm guy, who has the ability to listen and read people when needed. “Edgar is a unique character,” said Murray. “I think there are so many layers to peel back, so it's a very slow burn on really discovering who this man is, what his background is, and where he comes from. It's been fun for me to see where he's going, what he wants, and what his quest is all about. Beyond that, I can't say much.”

Sure, Edgar is a deep character, and he’s probably a villain, but fans were quick to notice how charming he is, with some hilariously tweeting about how his good looks could get anyone to sign up for a cult:

With just a handful of episodes left in this season of Riverdale, I know fans are hoping to see much more of Edgar before the finale. Who knows, he may finally reveal his true intentions for the town, and possibly even end the season on another slow clap.