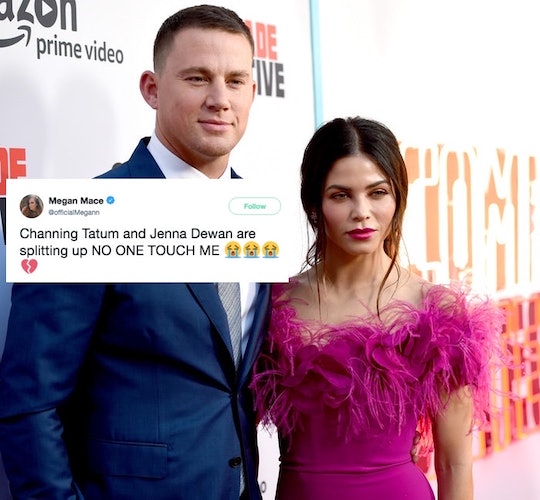 In what seems like a totally shocking turn of events, Channing Tatum and Jenna Dewan announced they're splitting up after nine years of marriage. Fans of the Step Up couple are absolutely shattered by the news, quickly taking to Twitter to express their utter disbelief that the pair has called it quits.

Before sharing the news on each of the Instagram accounts, Tatum and Dewan shared a lengthy statement with People announcing their split. "We have lovingly chosen to separate as a couple," the statement read in part. "We fell deeply in love so many years ago and have had a magical journey together. Absolutely nothing has changed about how much we love one another, but love is a beautiful adventure that is taking us on different paths for now."

The statement continued, "There are no secrets nor salacious events at the root of our decision — just two best-friends realizing it’s time to take some space and help each other live the most joyous, fulfilled lives as possible. We are still a family and will always be loving dedicated parents to Everly. We won’t be commenting beyond this, and we thank you all in advance for respecting our family’s privacy."

And with the devastating news out and in the open, tweets began pouring in. If you immediately said "Nooooo!" as you read this headline or saw their Instagram posts, you're definitely not alone. If you thought to yourself, "love is dead," you're not the only one. Needless to say, people did not see this news coming.

Although this news is incredibly sad and it might seem like it totally came out of left field, it certainly doesn't look like all love is lost between the two. As Tatum and Dewan shared in their statement on Monday night, they "lovingly" made this decision as a couple. They also wrote that they're still and will always be a family together and "loving dedicated parents" to their daughter, 4-year-old Everly, whom they welcomed on May 31, 2013.

Still, the internet is very much heartbroken that one of Hollywood's most beloved couples — who famously met and fell in love on the set of Step Up in 2006 — has decided to separate. And it feels like it was just yesterday that Tatum and Dewan attended the 2018 Nickelodeon Kids' Choice Awards together with young Everly, during which she made her first public appearance as her dad presented an award onstage.

Perhaps that's why people are taking the news like a punch to the gut? Dewan and Tatum have long oozed #CoupleGoals and have been so fun to watch as parents to their daughter. The 37-year-old Magic Mike star, for instance, once told CNN that fatherhood would be his "greatest production yet," as Vanity Fair reported. And 37-year-old Dewan, for her part, has been refreshingly honest about motherhood, once revealing that being a working mother is "definitely a challenge," according to Us Weekly.

Although they haven't shared everything about their relationship or their lives as parents to Everly with fans, it's clear through these tweets that they felt connected to them and this news is no less shocking from when they first heard it.

As the internet continues to digest the sad news and more and more devastated reactions pile in, it's important to remember that this decision was "lovingly" made for the well-being of their family together and they'll remain "dedicated" parents to their daughter. Still... it's definitely a hard pill to swallow.