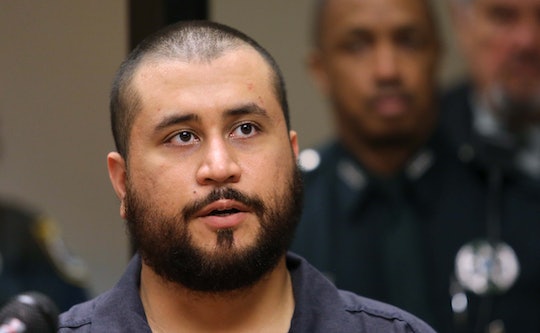 If you saw the name George Zimmerman trending on Monday on social media, it's because the man formerly acquitted of shooting and killing a teenaged Trayvon Martin was later involved in a road rage incident where someone shot at his car. Today, the man who shot Zimmerman's car has been sentenced to 20 years in prison, causing people to light up social media with their outrage. Here are just some of the tweets about George Zimmerman and the man who tried to shoot him that show the glaring double standard between what happened when Zimmerman shot Martin and when a man shot Zimmerman's car.

A Florida jury convicted Matthew Apperson of a variety of crimes last month stemming from a 2015 altercation with George Zimmerman which led to Apperson firing a gun at Zimmerman's car. Apperson said he was shooting in self defense after Zimmerman brandished a weapon, but Zimmerman denied that and said he did nothing to provoke the attack, Business Insider reported.

Zimmerman blamed Apperson for causing the incident, saying, according to WFTV-9, "I don't believe in blaming the gun." Apperson claims he was driving when Zimmerman pulled up next to him and threatened to shoot him, according to WFTV. He said he shot the single bullet into Zimmerman's car in self defense.

"I said, 'What are you going to do? Shoot me like you did that little kid?'" Apperson testified, according to WFTV. "He said, 'By the way, I am going to kill you. I’m going to shoot you just like I shot Trayvon.'"

Zimmerman was acquitted of shooting and killing Trayvon Martin, an unarmed black teenager, in 2012, according to The Hill. Zimmerman, like Apperson, claimed self defense, although with a far different outcome.

The irony — and what many see as an injustice in the verdict — caused many to post messages of outrage claiming that, once again, Zimmerman appears to have come out on the winning side of the self defense argument.

Circuit Court Judge Debra Nelson presided over the trial and called Apperson a "danger to the community" and handed down the 20-year sentence, the mandatory minimum, according to WTAQ. Apperson's wife said her husband didn't get a fair trial. "I can't wrap my head around all of it," she told WFTV. "The lies, the things people have held onto, it's just so much injustice and it's such a shame."

There are plenty of other people who share her disbelief and disappointment. Take a look at these tweets:

There's plenty more but you get the idea.