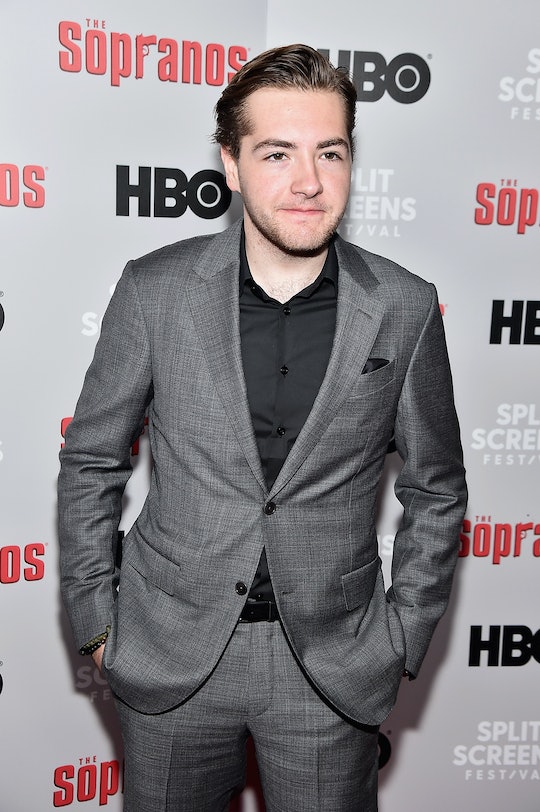 If it's not big enough news that there will be a Sopranos movie, the Twitter-verse had a lot more to manage today. Tweets about James Gandolfini's son playing young Tony in the Sopranos big-screen prequel show that fans have a truly special relationship with the show... and the late character actor who helmed it.

As HuffPost reported, James Gandolfini's son, Michael, is not just another second-gen Hollywood kid with some TV experience (HBO's The Deuce). He's obviously got some real chops. How else would he have been cast in a role that's possibly the most complex part TV has ever seen... Tony Soprano, a mob boss with a heart of gold — and the need to talk to a shrink about his day job?

Now, of course, the TV drama The Sopranos, which ran from 1999 to 2007 per HuffPost, was one thing, and the big-screen version, featuring both new actors and some of the old cast, as confirmed by the website, will be something new.

For one, as as The Hollywood Reporter noted, the prequel, entitled The Many Saints of Newark, is set in New Jersey in the 1960s, around the time of riots in the Garden State, involving the clashes that were then taking place between Italian Americans and African Americans.

For another, it stars a whole other set of performers, including Alessandro Nivola, Vera Farmiga, Jon Bernthal, Billy Magnussen, and Corey Stoll, Deadline confirmed, and will be directed by Alan Taylor, who also directed episodes of Game of Thrones, Nurse Jackie, and Mad Men.

However, for those worried about keeping the original spirit alive, the script was co-written by series creator David Chase, HuffPost confirmed, while Deadline added Taylor helmed several episodes of the small-screen version.

But when fans on Twitter found out about the new Tony — the new story will be something of an origin myth, about how young Soprano rises in the ranks, according to Deadline — people took the news in stride. "It's nice that his son's playing him at least," noted one fan.

People seemed to take the news personally, as if they actually knew James Gandolfini. Several users asked if the news could possibly be true, while another simply said, "Wow."

It's no wonder people are having such strong reactions: As Deadline noted, The Sopranos just celebrated its 20th anniversary and has gone down as one of the greatest series of all time, capturing 21 Emmys and five Golden Globes in six seasons. It also nabbed Peabody Awards for its first two seasons.

As a forever fan of the show, I agree with the crowd who related to Gandolfini as the flawed but sympathetic Soprano: It didn't seem like the actor was just playing a part. It felt real.

When James passed in 2013 at only 51, as per Variety, I remember people feeling like they'd lost a relative.

Michael Gandolfini, who has noted his dad's influence on his life on social media, seems to understand the importance of the moment. "It’s a profound honor to continue my dad’s legacy while stepping into the shoes of a young Tony Soprano," Gandolfini told Variety.

And before you go assuming that nepotism was the only factor involved, Deadline added young Gandolfini had an intense audition process to nag the role.

Also, playing your parent isn't the strangest idea, Cracked.com noted: Actress Mamie Gummer took over from mom Meryl Streep in one movie's flashback scenes while Emilio Estevez was briefly cast as his real-life dad, Martin Sheen, in scenes needing a much-younger Sheen on The West Wing.

I can't wait for the Sopranos movie. And, yeah, my expectations will be sky-high. If it doesn't live up to expectations, well, the series' mob of diehard fans will be pretty noisy.