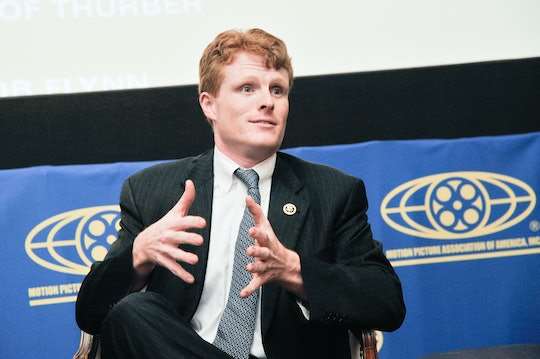 Perhaps it's an effort to make it through a State of the Union address attempting to sum up the dumpster fire that was 2017. Maybe it's the need to focus on anything other than the divisive rhetoric dominating the current political climate. Regardless, very little can distract a viewer from the messages of both the State of the Union and, this year, the Democratic response. So no, don't judge the tweets about Joe Kennedy's wet mouth during his State of the Union response. Instead, just embrace them for what they are: self care.

There were, of course, some very poignant points discussed during the Democratic response. Kennedy spoke about the importance of Dreamers, and how vital immigrants are to our country and our continued prosperity. And there were moments in which Kennedy called for hope and continuous determination, regardless of how difficult the last year has been or how trying this current year has already proven to be. At the beginning of his speech, Kennedy said, "It would be easy to dismiss the past year as chaos. Partisanship. Politics. But it's far bigger than that. This administration isn't just targeting the laws that protect us — they are targeting the very idea that we are all worthy of protection."

Still, it was difficult to focus on the topics discussed when Kennedy looked like the "messy eater" Sex and the City's Miranda Hobbs dated. Here are just a few Tweets poking fun at Kennedy and, well, whatever was going on with his mouth:

Of course, Kennedy isn't the only politician to distract the American people with, well, unforeseeable oddities. As you may recall, dear reader, Republican Marco Rubio experienced a water bottle fiasco in his Republican response to President Barack Obama's State of the Union in 2013. Simpler times, to be sure, but the internet was on fire with jokes, memes, and other harmless if-not-slightly mean spoofs on Rubio's behalf. So is Kennedy the first politician to distract an audience from the larger, arguably more important points of a speech? Nope. Will he be the last? Absolutely not.

Alright, that's all well and good, but it's vital that we remember the reason for the speech in the first place: to address the issues plaguing our country; many issues that are, undeniably, being perpetuated by the current administration.

For example, President Donald Trump decided to end former-President Barack Obama's DACA. The decision to end the program, which stands for Deferred Action for Childhood Arrivals, impacted as many as 800,000 Dreamers, according to NBC News. This issue was addressed multiple times during the Democratic response, which Kennedy saying directly to Dreamers, "And to all the Dreamers watching tonight, let me be clear: Ustedes son parte de nuestra historia. Vamos a luchar por ustedes y no nos vamos alejar.

You are a part of our story. We will fight for you. We will not walk away."

Kennedy touched on the incredible acts of courage and resilience many Dreamers showed in the previous year and as they've been made to fear for their livelihoods and their families, reminding the country that a young man during a march held a sign that said: If Trump builds a wall, our Generation will tear it down.

So, yes: poke fun. Make jokes. Do whatever it is you have to do (in a healthy way) to get through this current political cycle and beyond. Do what's necessary, including laughing and poking harmless fun at our elected officials, to continue to resist. But don't miss out on the important messages in the process.

After all, we want to make sure the next generation has something to laugh about, too.