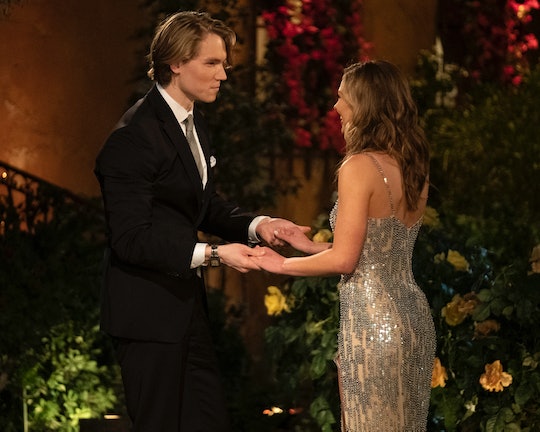 Every season on The Bachelorette, you have a handful of contestants who seem like legitimate matches for the star and others who seem like they will make a lasting impression in other ways. John Paul Jones might be one of the latter and because of his overabundance of confidence. I can already see him lasting at least a few weeks, or long enough to earn a spot on Bachelor in Paradise. And the tweets about John Paul Jones on The Bachelorette prove that he has already made an impression fans, whether it's good or bad.

One of the first things that Bachelorette fans noticed about John in tonight's premiere was that the profession listed under his name also happens to be his name. Clearly, the goal isn't to take the guy seriously and so far, fans haven't. Luckily, I don't think he takes himself seriously anyway judging by his introduction with Hannah.

Naturally, fans have had mixed reactions to the contestant, from comparing him to Prince Charming from Shrek to labeling him as one of this season's douches. It might be too soon to toss that title around, especially since the guys can't always be blamed for their limo exits, but John isn't off to the best start.

Some fans are just put off by John altogether. Maybe it's his general demeanor or the fact that he gives off an air of too much confidence, but the Bachelorette fans who aren't into him are certain that he is even creepier than he seems.

Other fans just aren't feeling the whole three-name thing. Any guy who insists on going by three names and uses that as his opening line with a women can't really be taken seriously. Again, that's probably John's goal, but it definitely isn't helping his case with Bachelorette fans.

Even if he acted like the perfect gentlemen during his first meeting with Hannah B., John still has his name listed where his job should be and that already sounded the alarm bells for some fans. This isn't the first time Bachelorette producers stuck something different than a contestant's actual profession under their name. In The Bachelorette Season 12, Daniel's job was simply "Canadian," so it's nothing new. It's just not winning over any fans just yet.

There's still time for John to redeem himself. This is only the premiere, so if John can do literally anything to seem sincere and like he's here for more reasons other than getting some screen time and securing a Bachelor in Paradise spot, then he will have made his time in The Bachelorette premiere a little more meaningful.

Jokes aside, I'm sure that John has the potential to be more for Hannah than this season's comic relief. But even if that's the case, I don;t think John has a problem with being the class clown of the cast. He already doesn't seem to take himself seriously and every season needs someone to goof off and lighten the mood without starting drama.

Every Bachelorette season has those few contestants who are never really taken seriously and even though John seems like one of those guys, he might still be good for a few laughs and for some golden end credits scenes that always lighten the mood. There's nothing wrong with being a character on The Bachelorette, because every contestant who isn't necessarily there to take things seriously usually make the other serious contenders stand out a little better. John is the necessary comic relief that Hannah's season will need until she needs to narrow her guys down a little further.