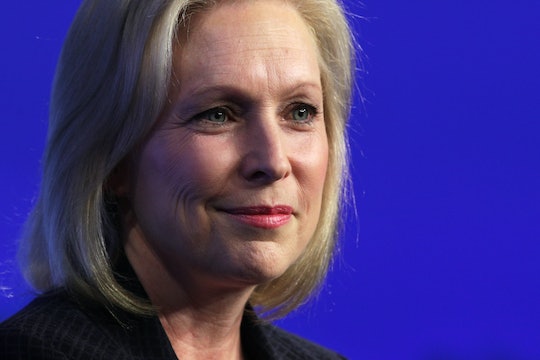 The race for the White House just lost one contender as New York Sen. Kirsten Gillibrand announced Wednesday that she has dropped out of the 2020 Democratic presidential race. Of course, there have been many reactions to Kirsten Gillibrand ending her presidential bid, with the majority of supporters paying tribute to her impressive record on women's issues.

Gillibrand, who first announced her presidential bid in March, shared her decision on Twitter. "Today, I am ending my campaign for president," she captioned her video statement on Twitter. "I am so proud of this team and all we've accomplished. But I think it's important to know how you can best serve. To our supporters: Thank you, from the bottom of my heart. Now, let's go beat Donald Trump and win back the Senate."

The politician's decision came to be shortly after she did not meet the donor and polling thresholds outlined by the Democratic National Committee (DNC), therefore not qualifying for the third round of debates, according to CNN.

Out of the 20 other Democratic presidential contenders, Gillibrand polled the lowest at just under 1 percent nationally, according to The New York Times.

Despite her announcement, Gillibrand definitely made a mark on the political scene with a campaign focused on equality, especially for women, according to HuffPost.

Gillibrand co-authored the Family and Medical Insurance Leave Act, which would give new parents up to 12 weeks partially paid maternity leave, which possibly inspired one Twitter follower to post: "Thank you for all of your hard work, great ideas and your focus on women reaching true equality-especially Equal Pay, proper healthcare and taking a stand against sexual harassment in the workplace."

Another follower, sad to see her leave the race, tweeted, "You deserved so much better than what you received from us. Your voice was invaluable, and I've rarely seen a fiercer advocate for women. The race will be made worse by your absence."

Throughout her candidacy, Gillibrand was a staunch defender of abortion rights, promising to review future judgeship based on their stance towards Roe vs. Wade, according to BuzzFeed News. She also held pro-choice rallies in states that passed the harshest restrictions again the act.

She also challenged former Vice President and Democratic frontrunner Joe Biden on women's rights issues, specifically his support for a law that would restrict federal funding for abortion services, a stance he later recanted, according to Vox.

Gillibrand's contributions to women's rights were not lost on her political opponents, with California Sen. Kamala Harris tweeting: "My friend ⁦‪@SenGillibrand⁩ is a brave voice on some of the most critical issues facing our country today — from childcare to sexual assault. She is a champion and I know she's not done fighting for women and families everywhere."

Massachusetts Sen. Elizabeth Warren wrote: "Thank you for being part of this race, @SenGillibrand, and for your unwavering commitment to fighting for women—from reproductive rights to paid leave. Your voice has been strong and clear, and your determination is always on display. I'm proud to keep fighting alongside you."

Voters have not heard the last of Gillibrand. She plans to endorse a candidate for the 2020 presidential election but, "she is not going to rush into that," one of her aides told CNN. Although the politician didn't reveal whether she would nominate a woman, she did allude to the possibility. "I think that women have a unique ability to bring people together and heal this country. I think a woman nominee would be inspiring and exciting," according to The New York Times. Well-said.