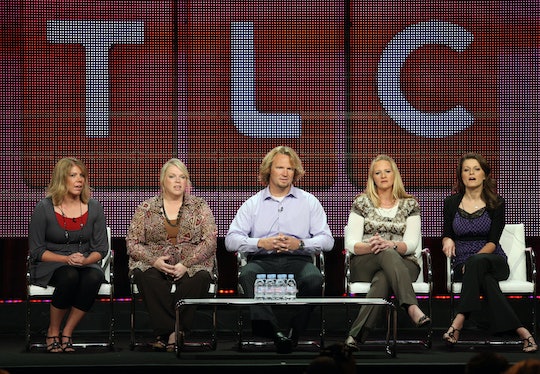 Last summer, news broke that the Brown family was moving from Las Vegas, their home of seven years, to Flagstaff, Arizona. While a few details about the relocation's underlying challenges were reported ahead of the premiere, Season 13 is now well underway and fans are seeing exactly how complicated the decision really was. Tweets about Kody from Sister Wives have been pretty unflattering after the past few episodes, especially as Sister Wives Twitter learns how much he pushed his otherwise skeptical spouses into the move.

In an interview revealing some of what to expect in Season 13, Kody, Meri, Janelle, Christine, and Robyn sat down with Us Weekly and dished a few reasons behind the move — notably the fact that Las Vegas was cramping their lifestyle. They complained that, although the people of Las Vegas were nonjudgemental and accepting of their family, the weather was leaving the typically outdoorsy Browns feeling cooped up. They'd have to spend a lot of time indoors just to escape the heat, and living in a bustling city wasn't exactly working for them either.

Escaping to a liberal college town in the mountains, complete with snowy winters (which have already featured prominently on the Sister Wives Instagram accounts) seemed like a good move. But as the season went on, the Sister Wives' reluctance to uproot their kids became clearer and clearer.

"I was really conflicted," Janelle told Us Weekly back in January, but she did clarify that it had more to do with the timing than the move itself. In a clip from the show, the wives can be seen discussing how a more convenient time to move would be once "the triplets" — the family's nickname for Robyn, Christine, and Janelle's similarly-aged teenagers — had finished high school. Transferring them right before their senior year seemed cruel and unusual, so the family would have to pull off a move in a matter of months to get them settled ahead of their junior year instead.

"In my darkest moments, I did consider staying behind," Janelle continued, adding, "We finally came to a place where we were all at peace with it, and the kids have really blossomed here."

For now, the family is living in four separate rental homes scattered across the community. This posed its own challenges since, in Las Vegas, the wives were accustomed to living in close proximity as neighbors at the end of a cul-de-sac. The family has purchased four lots totaling nearly 15 acres on which to build in Flagstaff, according to the Associated Press. But plans for what to do with that land are also in tense negotiations.

The Sister Wives feel comfortable with their dynamic of having separate homes, but Kody has dreams of the family living together under one roof. He wants to build his dream polygamist family home, which the wives are pretty adamantly against. Fans already believe Kody steamrolled his way into the move, and neglecting his wives' wishes when it comes to building isn't exactly bringing anyone over to his side. The family has yet to finalize its plans for the lot, so fans will have to stay tuned to see who wins that argument.